As we were enjoying our meal at the sidewalk café in Melbourne’s Little Italy, a woman came along with a little dog and started chatting up Andrew.  Now, Andrew is nice looking, so I didn’t blame her.  However she was at least 20 years older than him.  That’s even older than me, and it hadn’t occurred to me to chat him up.  She looked like she hailed from Los Angeles, with wide-frozen botoxed eyes, enormous puffy lips, and more make up than a Sephora store.  Her suit appeared to be spray-painted on, it was so form fitting, and she was swaying unsteadily on six-inch heels. Maybe she had really just stopped to grab the table for support.

Andrew seemed oblivious to her intentions.  Heidi and Danielle seemed to think nothing of the fact that a total stranger had budged her way into our conversation.  They oohed and aahed over the little dog, whose name was Charley.  The woman had the same lilting, posh accent as our botanical gardens guide.

“Chah-lee,” I intoned nasally, and everyone started.

“Well that’s one word I can say but only because there’s a character on the Doctor Blake Mysteries named Charlie,” I confessed.  “I love the way they pronounce Charlie, so I repeat it out loud when I hear it on the program.”

Sadly, the actor who plays Doctor Blake was recently fired for #MeToo-style infractions.

We got home very late and reluctantly rolled out of bed the next morning to ride the legendary Puffing Billy Railroad.  Yes, another legendary Australian railroad.  This rail line was built to populate and develop the rural areas east of Melbourne a hundred years ago.  It was closed in 1954 but revived by volunteers, who operate it as a tourist attraction.

It was one of those activities where you scratch your head over the brochure unless you are a local who has ridden on it before.

Which is what Heidi did as we were trying to get out of the house.  “Dean said we should start at Belgrave, get off at Lakeside, then get back on and go to Gembrook.  We have to be at Belgrave at 10:30 or the next train isn’t until 12:30.”

“You can read more in the car,” Danielle urged.

“Or we can go straight to Gembrook ….” Heidi read from the back seat as she flipped the brochure over and attempted to trace the timetable with her finger as we careened through the streets to get to the station.

“$77.50 per person,” answered the ticket seller when we arrived panting after racing several blocks from the parking lot.

It was one of those travel moments where everyone sucks in their breath and looks at each other questioningly while internally saying, “Jesus, that’s a lot for a train ride!”  You don’t want to offend the poor volunteer who is just doing his unpaid job, but you don’t want to be a sucker, either.

We compromised, forking over $59 each for tickets to Lakeside, then ran to catch the train. It was totally worth it.

There was the beautiful train itself.  There’s nothing like the sound of a train whistle, a conductor shouting “All aboard!”, and the smell of Sulphur from the steam engine.

We took selfies with Billy. 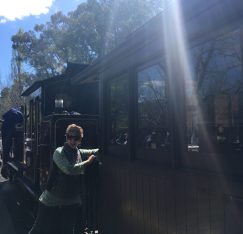 The volunteers were clearly into their work.

The scenery was stunning. 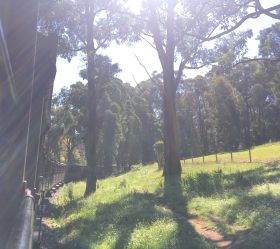 When we crossed this trestle bridge, people below waved and smiled.  Apparently it’s a local tradition to go wave at Puffing Billy.

“Imagine being a school teacher being sent out here in 1910,” I said to Heidi.

“Yes, it would have been very exotic,” she replied.

We got off at Lakeside and ate in the old tymie café while parrots begged us for scraps.  We strolled around the lake.

We did not rent one of these.

Fighting wombat mange could be another fun volunteer job, as long as it couldn’t be spread to humans.

I kept thinking of my nephews, who would have loved this day.  If I ever win the lottery, my first priority would be to take my nieces and nephews on trips like this.