As I waited for my flight, I reflected on how wonderful it is that people welcome me into their homes.  I knew Dean and Lisa from UK days, but we hadn’t been close.  I had never met Auntie Margaret.

Getting to know new people, and getting know acquaintances better, is such a huge attraction of travel for me.  Spending time with people I care for, like Heidi, is a luxury.

That said, I do like my alone time.  I’m an introvert who likes people, but I’m still a loner.  I can happily spend days in my house without hearing a human voice.  I’m never bored.  I get lost in household projects, a book, or long walks in the woods.

After 18 days of being crammed into planes and trains and cars with fellow human beings, I was ready to be alone.

As I boarded I was diverted from these lofty thoughts by a woman behind me asking the flight attendant for a seat belt extender.  This was my first knowledge that there was such a thing.  Australia doesn’t have quite as high a percentage of its population who are obese as the US (33%), but it’s up there, at 27%.

A flight attendant asked if I would like something to drink.  I replied yes, a Diet Coke please, which was when she informed it would cost $3.  Three dollars for a can of coke!  Way to nickel and dime, Virgin Australia!  I asked if I could have a cup of water, if it was free, and she gave me one, smirking like I was a cheapskate.

I read the thick weekend edition of a newspaper from front to back except for the sport section.  I compiled a list of new Aussie vocab to Google when I had wireless: squiz, spruiking, chook.

There was an article about young members of rich Aussie families who posted photos of themselves with products on Instagram.  They had millions of followers and made millions of dollars which they didn’t need.  They were beautiful, vapid, and dull eyed.

Another article was about an immigration scheme to make people settle in “regional areas,” meaning underpopulated areas that need workers.  To quote:

“Australia is in the self-inflicted paradox of having vast amounts of space but no room.

“Australia has pursued a big immigration intake for the entire post-war era for the very selfish reason that it’s in the national interest.  It boosts the economy.  It lowers the average age of the population.  This means that national aging is slowed.  As a result, the rising cost to the taxpayer of healthcare and aged care and welfare is slowed.  And it adds skills.  And cultural richness.”

The debate is: is it unconstitutional to dictate where people must live?  Is it impossible? Is it unconscionable?

“It is none of those things.  Australia already has such a program in place. It’s a category known as designated area migration agreements. There’s only in in effect, in the Northern Territory, but it exists in principal and in practice.”

In the proposed national scheme, people applying for Australian work visas will be given extra points if they indicate they are willing to live in Tasmania, for example.

Why can’t America have debates like this about immigration?  All we talk about is whether to build a wall or not.  A wall—such a 15th Century solution.

Australia has its version of a wall.  It’s the island of Nauru, where desperate migrants from Syria and Congo are penned like animals. But there seemed to be a lot of other ideas afloat.

It’s about control, right?  Any country justifiably wants to know who is entering and how they will contribute to the common good.  The US is one of few countries with a diversity lottery—most countries manage immigration based on merit, conferring extra points for engineering degrees, fluency in the native tongue, or big bank accounts.

As we approached Cairns, I looked down at the verdant scenery.  No wonder people want to come here.

I made a note to partake in the airport wine tasting ahead of my return flight. 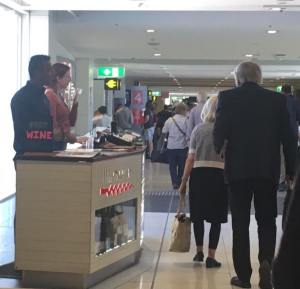 My van driver was a British immigrant.

“Twenty years on, and me and the wife ain’t never been back.”