Day 21 of my Australia sojourn. I waited eagerly in the reception area of the resort to catch my 7am bus to the Daintree Rainforest. As I’ve mentioned, I’m sort of obsessed with plants.  I also love heat and humidity, so rainforests are my kind of environment.

A German couple sat on the couch opposite and we chit chatted about where we were going. Their bus came and went.  An Aussie couple I had made small talk with at the pool came out, said they were going on “a brekky reccy,” and left.  It was 7:15.  An English family of four came and we didn’t talk because their bus pulled up as if queued to their arrival and whisked them away.  I began to feel anxious.

People came and went.  It was just past 8:00.  The Aussie couple returned and were surprised to see me.  Maybe I imagined it but I thought they looked at me pityingly.

Pangs of emotion welled up.  It wasn’t all the couples and families and no one else sitting by themselves waiting for a bus that never came.  It was not wanting to waste a day.  One day of leisure was enough for me.  I want to do and see everything.

Jim arrived to open the office and did a double take when he saw me.  It turned out there had been a mix-up on the tour company’s end, and he apologized.

“It’s not your fault,” I told him.  “What can I do, still today?”“All the tours are either full day or half day,” he said as he rifled through piles of brochures.  “It’s too late for the full day ones,” so the reef and the Daintree are out.”

“The two things I came all this way to see,” I replied glumly.

I had seen ads for this place in the airport, on the street, and in brochures for other attractions. They certainly were good self-promoters.  I felt a surge of fear at the word ‘crocodile.’  Did I want to spend 5 hours in being surrounded by them?  The place sounded like a totally tacky tourist trap.

Hartley’s turned out to be pretty fun.  There was much more wildlife than crocs.  Did you know Cassowaries are prehistoric Kung Fu fighters with giant claws with which they can disembowel you?  They’re actually very shy and avoid humans, but here’s video about how to survive a cassowary attack in case you decide to plunge into a jungle, locate one, and provoke it. 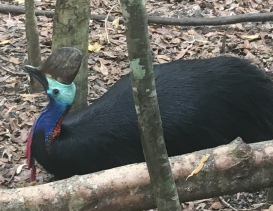 There was an interesting small exhibit about the break-up of Gondwana, the mega continent that had included almost all the continents.

And about first encounters with kangaroos.  People back in Britain thought the explorers’ tales and early depictions of roos were tall tales until someone managed to bring back a live specimen.

There was the obligatory croc boat ride, where a young blonde guy named Matt fed dead chicken parts to gigantic crocs and made dismemberment jokes.

Having worked up an appetite, I had a burger in the café.  It had beets in it; beets on burgers are an Australian thing.

I toured Hartley’s crocodile farm. I’m not sure to which end of the spectrum this sign was directed—animal rights activists or poachers.  Maybe both. 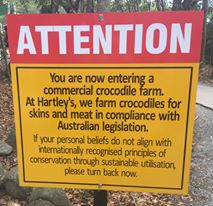 Our very earnest guide downloaded so much knowledge about breeding and raising crocs I felt confident I could start my own crocodile farm. 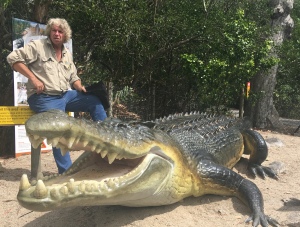 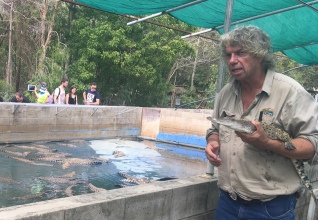 You could pose with a Koala for $$.  The poor things.

I bought yet more souvenirs in the gift shop.  All my unsuspecting friends’ and family members’ birthdays and holiday presents for the next year were now covered.

Which nativity scene would you have chosen—kangaroos or koalas? 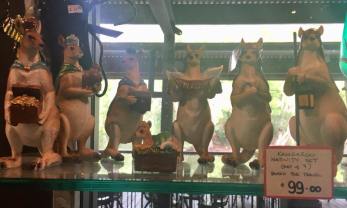 I went to pay, the cashier asked for ID, and that was the moment I realized my passport was gone.  She let me pay anyway.  I said the only logical thing: “It must be in my room.”

But I knew it wasn’t.