My last day in Australia.  This was the weather Woolloomooloo, the area in which the Botanic Gardens are located.  And next to that, the weather in St. Paul today. 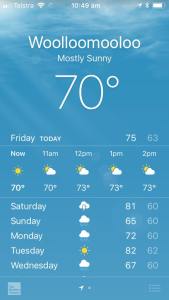 I’m sorry to be one of those people who whines about weather.  But every other day I get one of these notices.

There have been six snow emergencies so far this year, and March is the snowiest month in Minnesota, so it ain’t over.

What these notices mean—for those of you who don’t live around here—is that I have to move my car by 9pm, then move it again by 8am the next morning so the plows can clear the roads.

Try moving your car when it’s a foot deep in heavy, wet snow (as opposed to light, fluffy snow) and the wheels are encased in ice.  Yesterday, hacking away at wheel-well ice on my knees, my heavy-duty scraper broke in half.  I sent it flying into a snow bank with a primal scream. I then employed an ice chopper, tears, a shovel, swearing, a hammer, grunts and howls of anguish, and cat litter.  It took 45 minutes and I think I blew out a knee, but I got my car moved.  Thank god I’ve got a manual transmission so I can rock it back and forth.

And I will likely have to do it again in a few days.

People say the snow is pretty.  I know I should try to appreciate it more. These are some photos from inside my snug, warm house during and after a selection of blizzards. 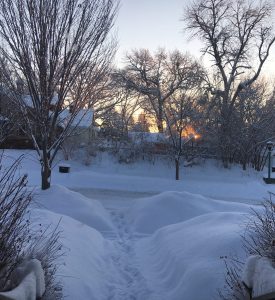 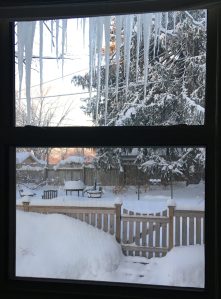 And here are some snaps from the snowshoeing I did with my cousin and friends last weekend. 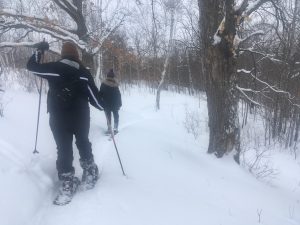 The dogs had at least as much fun as the people.  I love how she is covered in snow balls. 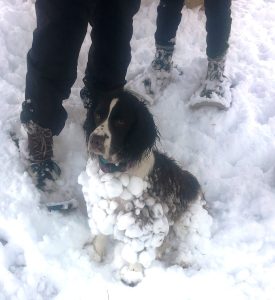 I’m aware that I am procrastinating on wrapping up my writing about Australia.  As long as I am still writing about it, it feels like part of me is still there.

Another day in the Botanic Gardens.  Heidi was on a mission to see some of the Invictus Games, and I was happy to go along.  Prince Harry was rumored to be making a speech just outside the gardens. Rumored.  We stopped and asked five people, and no one knew, not even the volunteers or employees.

“Sorry, love, we ran out of programs ages ago and none of us even know the schedule,” was one volunteer’s response.

In case you’re wondering if there were any interesting plants in the Royal Botanic Gardens, there were.  I kept lollygagging to take photos. 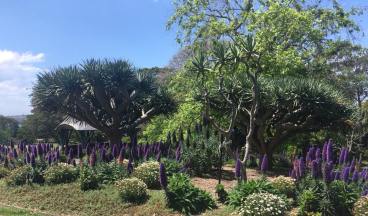 I wanted to stop at the gift shop again.

But I insisted. It would only take a minute.  There was a card I had seen that I hadn’t bought and now as long as we were passing by … but we both became mesmerized by the beautiful botanical-themed items and spent 20 minutes there.

We then raced across a broad lawn to find we had just missed Harry’s speech opening the bicycle races.

Heidi’s shoulders sagged and she let out a sigh.  This is a woman who lived in London for 18 years, who had gone to every celebration of the Queen’s birthday, the Golden Jubilee, any and all flag-waving, Hail Britannia, crowds-in-the-street type celebration that came with an extra day off work.

“No drama!” Heidi shrugged as we moved with the crowds to view the races. 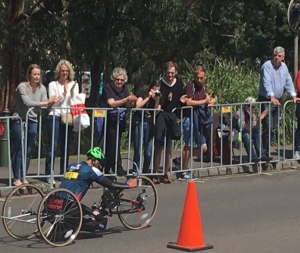 There were competitors from 18 nations, all of them physically or emotionally handicapped.  I was impressed that as much weight was given to veterans’ mental trauma as physical.  It made sense, since Harry and his brother William support mental health charities at home because of the trauma they endured when their mother, Princess Diana, died.

That said, the cyclists with only one leg were the most impressive.

Visitors were wearing their national colors.

Some were more gung-ho about representing their countries than others.

We verbally edited the “Taco’s and burito’s” menu, then moved on to order kimchee chicken burgers for lunch. 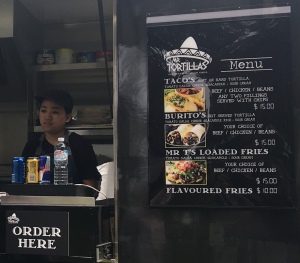 Lastly, I added to my collection of photos of myself with large furry animals.