Last night I dreamed that the whole world was—literally—turned upside down.  I was stumbling along the ceiling, with books and coffee mugs falling past me, when someone pulled me into a building where everything had been glued or attached to the ceilings by Velcro. This meant we could hang out on the ceilings, which were the new floors, and everything would feel normal.

But the person who’d brought me along cautioned, “Don’t look out the window.  It’ll remind you that everything is really upside down.”

Like a toddler, I think I am going through a phase.  I left full-time employment three and a half months ago.  Up until now, I’ve been busy with contract proposal writing, working part-time at the Y, and boosting my exercise levels—as long as I’m at the Y twice a week.  I was constantly shoveling and moving my car and scraping my windshield and batting icicles off the roof.  I did about 30 hours of CPR and other training as part of my Y orientation.

Everything was new and different and I didn’t have time to think about whether this was permanent or what.

I stand in the child care center at the Y, watching a group of four-year-old boys play with toy dinosaurs. Their names are Milton, Kash, Zacques and Denzel—Denzel Zhou.  A mom enters and checks in a new boy.  I look at his name on the monitor: βӕrәӦn.

The mother gives me a withering look as though I am a moron.

“Ah, I see!” I reply, trying not to sound too much like Basil Fawlty, and immediately forget how to pronounce it.  I will have to avoid using his name for two hours.

I do love the kids.  I like pivoting from proposals about torture to observing children at play.

My days are also punctuated with emergency room trips for my mother, her husband, and my aunt.

One day I spent three hours at the Y playing with an adorable Hmong baby named Howard, then rushed to the ER because my mom’s husband had fallen and they discovered he had a giant boil on his abdomen he’d been keeping quiet about, hoping it would just go away.

It didn’t.  They had to lance and drain it, and the smell almost caused me to pass out.

So I get to see humanity on both ends of the age and health spectrums every day.

Now the contract work has slowed.  The Y is routine.  The battle with snow and cold is over, for now.

As I sit and watch Howard drool and gnaw on a block, or wait endlessly in windowless ER rooms, I have hours to ask myself, “Is this it from here on out?  Taking care of babies and old people?  Am I taking a break from full-time work, or am I an early retiree?  My sister is moving to Oregon next month.  Why aren’t I planning a move to Belize to escape next winter?  Will I ever have any more adventures?  Shouldn’t I use this time to learn Chinese or write a novel or apply for one writing workshop per day?  Shouldn’t I be setting some goals, instead of reading and doing crossword puzzles and walking in the woods in my spare time?  Damn, I’m so lazy!”

Don’t get me wrong.  I don’t feel sorry for myself.  I know I’m super lucky to be able to take this time out.  Or whatever it turns out to be.

And so I have procrastinated on blogging because I just haven’t known what to write about.  Normally I’d be posting up a storm about my trip to Japan in June, but I have also been procrastinating on that.

Can you spot my car? 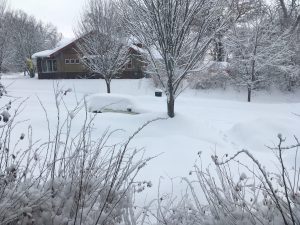 And here’s a big ol’ nasty possum I encountered on my walk in a city park.  It appeared to be eating a wiener, or maybe a baby rabbit.

Ugh.  Thanks for reading; it feels good to get some thoughts out of my head.