I had paid for breakfast at the Turtle Inn and it was my only disappointment with the place.  It consisted of fruit, a soft-boiled egg, and several pieces of Texas toast.  I don’t think of myself as a fussy eater but I don’t like runny eggs.  I ate the fruit and toast then had the last protein bar I’d brought along.

The sign for the Abyss was close by the inn.  I followed it, and more signs, along the river. The morning was clear and cool and there was dew on the grass.  I was greeted by this welcoming committee.

And this warning sign about bears.  I know bears from Minnesota.  You throw them some potato chips, then run like hell.  But I didn’t have any potato chips so my only hope was to not cross paths with any bears today. 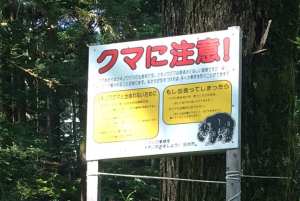 There were more jizos along the way. 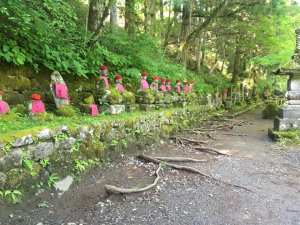 I had seen these little red-capped statues in Tokyo, where the signage explained they were in memory of children who had died.  A sign here said much the same.  It also told of a great flood that swept through the gorge in 1902.  Ah ha! The “abyss” was a gorge.  How disappointing.  I was expecting something so deep and dark that when you dropped a rock into it you never heard it hit the bottom.

Anyway, many of the jizos were swept away in the flood, but visitors have since noticed that the number of jizos changes every time they count them.  “Therefore they are called bakejizo, or phantom jizos.”  So there was something spooky here after all.

As for the Kanman Gorge itself, there was more signage which explained that many visitors have dreams of the deity Fudo Myoo, the greatest of the five wisdom kings of Buddhism.  “He protects ascetics by cutting away worldly desires with a flaming sword.”  I liked that image.  I think I may need a flaming sword intervention to separate myself from my duplex full of old furniture and knick knacks. 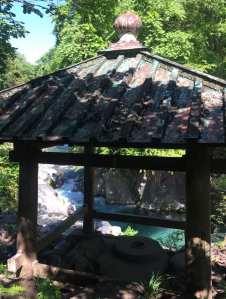 The path kept going through wild woods along the river.  I passed an occasional fisherman. The jizos turned into abandoned storage sheds and weirs guarded by rusty wire fences. I saw a large deer a few yards off the path.  She stared at me and twitched her tail, then bounded off.  I love this kind of walk—when you have no idea where you’ll end up and you can imagine it’s slightly dangerous but it’s not.

I emerged on the edge of town, where a sign pointed to a botanical garden—another place tourists never visit.

I pondered over this sign.  Subsequently I showed this photo to my sister-in-law, who puzzled over it for some minutes before explaining that it warns of sudden floods and landslides.  So even if you could read Japanese, you’d be swept away before you could suss out the sign. 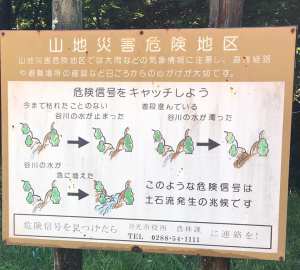 The botanical garden cost about $2 and I could have spent all day there.  The paths wound round and round; I kept getting lost and coming back to this same enormous tangle of tree and vine. 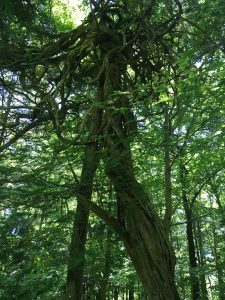 From the giant to the tiny—I stumbled into a field of forget-me-nots. 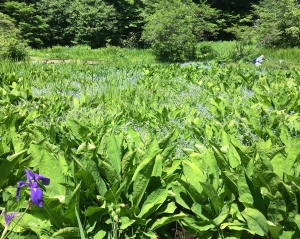 I sat for a few minutes, watching dragon flies hovering in the sunshine.

The sound of rushing water was ever present from the numerous streams that crisscrossed the gardens.

I stooped down and marveled at a tiny vine and its springiness.

I never do this at home.  I stride quickly to whatever is my next destination, eyes front and center.

This sign caught my eye; several of the letters look like Hebrew.  Funny, I guess there are only so many shapes humans can imagine for our alphabets.

I exited the garden; it was only 10am.  My next stop was the 106-room imperial villa, a summer residence for emperors until Hirohito hid out there during WWII.  What a contrast to Queen Elizabeth II and her family.  They had a northern estate where they could have safely waited out the German bombings.  But they stayed in London, where Elizabeth trained as military mechanic and truck driver.

This was my intro to the mindset of the Japanese toward WWII.