The next morning I sat down to another breakfast of Texas toast, fruit, and soft-boiled egg.  But then the hostess approached me and said gingerly, “This is not your breakfast.  You did not pay for it.”

“Oops!” I said.  “I thought I pre-paid for all three mornings?” But I had not, and with some relief (because I don’t really like soft-boiled eggs or Texas toast) I got up from the untouched meal which was meant for another guest and happily ate a Cup-o-Noodles before leaving on my day trip.

Lake Chuzenji is about a half hour from Nikko via steep winding mountain roads.  The bus stop was easy to find, and the bus fare system was brilliant.  I haven’t seen anything like it elsewhere. You take a ticket with a number on it when you board.  Then, a screen at the front tells you how much you’ll owe when you alight, refreshing at each stop.  Some guides had made it sound like it would be possible to walk to the lake, but that would have taken a couple hours, all uphill, with almost no space between passing vehicles and a sheer drop on one side or cliffs on the other.  The ride cost about $10.

At the station, signs pointed to Kegon Waterfall, so I dutifully walked over to have a look. 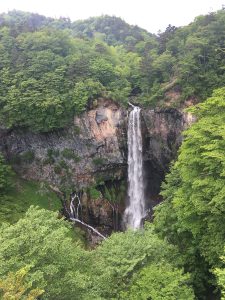 I searched for a way to get to the lake, but there were no signs except these: 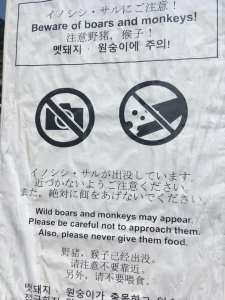 I walked this way for 10 minutes, then that way, then another.  I finally returned to the station and consulted a map.  The lake was in the fourth direction I hadn’t yet tried, and it was an easy five minute, downhill stroll.  This is the lake.  It is spectacular.

“This reminds me of Wolfgangsee,” I thought.  Lake Wolfgang is in the Austrian Alps, where I had visited two years earlier. There was even Lupin about; probably the climate and soil in the two places are similar.

I guess it is human nature to compare things to other things, but I tried to put thoughts of comparison out of my mind and enjoy where I was right then.

Lake Chuzenji is a resort area, deserted on the day I was there.  Number one travel tip: research when the school holidays are in your destination country, and avoid those times.  Unless you like heaving crowds, long lines, and paying double for everything. This was the empty shelter where crowds would queue for boat rides during the high season. 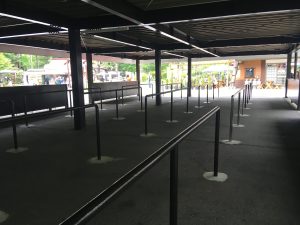 The duck boats were very picturesque. 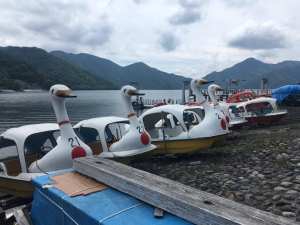 I was hungry and wanted to buy trout on a stick but the vendor had no change for my 5000 yen note.  I settled for a hot potato croquette filled with yuba, which was super tasty.

I walked along the edge of the lake for half an hour and “discovered” a Shinto shrine which turned out to be one of three called Futarasan in the Nikko area.  There were piles of little clay plates which visitors had smashed in a ravine. There was nothing about it in English. I didn’t smash any so I may have missed my big chance at …something.

I spent a quiet half hour with this guy and his deer (?) at the top.  I don’t know who he was. 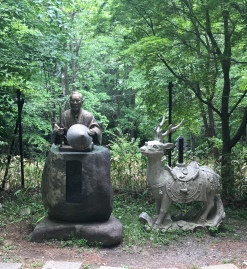 This was the simple shrine nearby.

I sat on a bench; there were no other visitors.  Butterflies fluttered by and birds whistled up a storm.  I found myself resisting urges to “do” something—eat a snack, write some notes, keep climbing.  After 20 minutes I walked back down, where I noticed this lovely lion.

Here’s the view back toward the mountain where the shrine sat.

This was parked in the lot.  I would love to rent one. 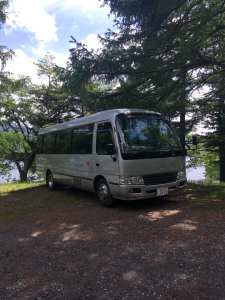 I was hungry again—can’t imagine why—so I was happy to spy restaurant curtains through the glass doors of a little mall.

The place had Japanese and western style tables. 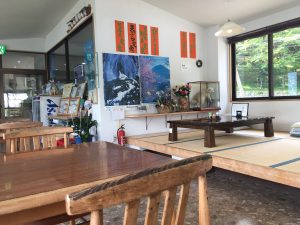 It was just me and a group of Japanese ladies who lunch.  This was my view. 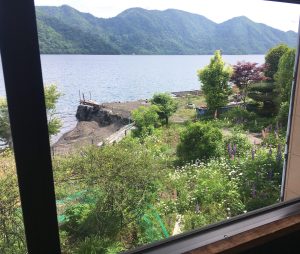 I had a big bowl of ramen and a beer.  What a beautiful day, and it wasn’t over yet.