The hotel website’s directions were so detailed and clear.  On the east side of Ueno Station, there was a massive roadway criss-crossed with pedestrian overpasses.  Seen from the air, it probably resembles this lattice-top pie, only a lot messier. 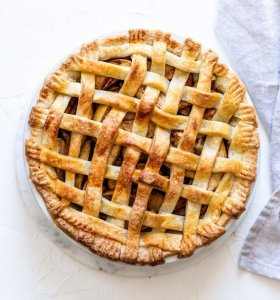 I just had to spot the Joyo Bank building and everything would flow from there.   It was pouring again, so I donned my poncho, furled my umbrella, and with my other hand dragged my suitcase up the 30 steps to the pedestrian level and scanned the horizon for Joyo Bank.

And no one around to ask except the smokers huddled in the smokers’ corral back at the station entrance.  I chose to walk on, hoping I just hadn’t spotted the word “Joyo” yet.

Just when I was about to give up and go back to the station to catch a taxi to my hotel, which really was only five minutes from the station, I ducked under an overpass to shelter for a moment and found a couple students also huddling from the deluge.  They were supposed to be handing out flyers for a hair salon but there were no takers around because in the downpour.

One of them handed me a flyer, looking very doubtful that I was the trendy salon’s intended demographic.

“Do you speak English?” I asked.  One of them did, although it was patchy. I asked if she knew where Joyo Bank was, and showed her the word in English when she didn’t understand.  She nodded vigorously; she and her coworker googled it and pressed the screen toward me to show me an image of a red sun.

I immediately spotted it at the top of a building.  I thanked them profusely and walked on.  Obviously this incident makes the case for having a mobile hot spot.  On the other hand, I got to interact with some delightful young people who were happy to be helpful.

The hotel had provided detailed, excellent directions in English, but it had failed to realize that not everyone knows the Joyo Bank logo.  Or maybe it’s just me.

I rolled into the New Tohoku Hotel and was greeted by another chatty—but brusque—hostess.  “You pay now!” she barked at me as I fumbled with my dripping wet suitcase, umbrella, backpack, and poncho.

I paid. “You leave bag, room ready at 3:00!” she ordered.  There were a half dozen other bedraggled would-be guests hunched together on a couch in the tiny lobby.  I left my bag and walked out for a look around the neighborhood.

I carefully counted the blocks and memorized landmarks so I would be able to find my way back.  There were several blocks of stores that sold nothing but household shrine supplies. 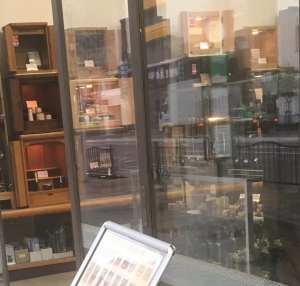 I came upon the tiny dog shrine I wrote about in a previous post.  My sister-in-law wondered if it was actually a shrine to foxes, but there’s no way of telling. 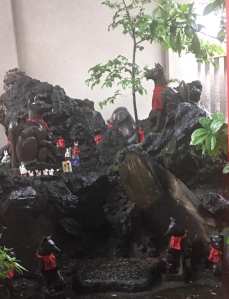 I walked back, passed the hotel, and kept walking.  There was this cool street art; did it indicate what went on inside? 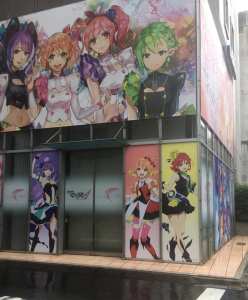 I passed an apartment building bike storage area.  Note it isn’t locked.  There isn’t even a door. 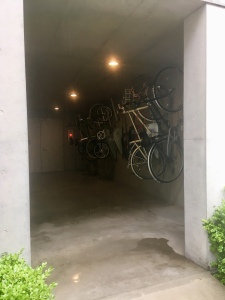 After six or eight blocks I was relieved to find an open-air but covered mall. It was full of veg stalls, restaurants, and posters for mysterious products, like these water bug toys.  Water bug toys!?  I kind of felt like a water bug myself right now.  My sister-in-law would shrug the next day and say, “Yeah, it’s a thing.” 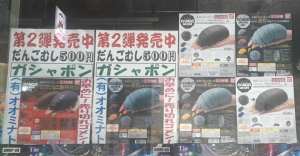 There is crime in Japan, and here’s the “Most Wanted” poster to prove it. 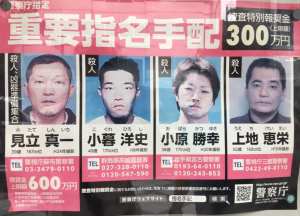 From my limited understanding, most crime is gang against gang as they vie for lucrative prostitution and gambling franchises.

While I’m posting photos of unpleasant things, I will share this one of ugly wires and an ugly building.  Tangles of wire and ugly buildings are everywhere.  It was hard to take a photo of something beautiful without wires getting in the way.  You will never see these wires or unsightly high rises in tourist guides. 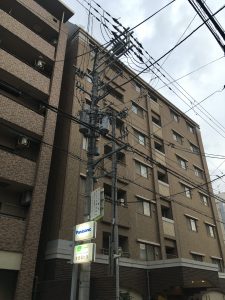