We took the hotel shuttle to Nara Station; well—the Japan Rail station—there is also a Kintetsu Rail Nara Station.  I was nervously psyching myself up to buy tickets to Shimoda for my nine-year-old nephew and me.

I was ready with Google Translate but the JR agent used a tiny blue device to facilitate our conversation.  It looked like it was decades old, so the Japanese must have been way ahead of Google on real-time conversation translators, although this provided text, not voice.

The transaction seemed to go smoothly, but there was no way of really knowing if I had what I needed until I met up with my sister-in-law’s parents the following week and they could read the tickets.

Next, breakfast at Le Bon Vie in the station.  I picked out a melon bun because I liked the sound of “melon bun.”  It contained no melon; it was a green bun filled with golden custard.  Pretty oishi anyway.  Lynn had something cheesy.  We munched and sipped our coffees accompanied by The Beegees “Stayin’ Alive” blaring on the Muzak.  Or is it all Pandora or Spotify now?

“Oh my god!” Lynn sputtered as she spotted something in front of the JR ticket window.  I followed her stare and nearly spit out my bun.  A young woman, a westerner, was buying tickets and trying to get organized.  She was very tall, maybe six feet, and barely dressed.  She wore a sleeveless, low-cut jumper with shorts so short her buttocks hung out as she bent over to arrange something in her backpack.  This view competed with that of her pendulous white breasts hanging down, bra-less, up top.

“I don’t know where to look!” I exclaimed.  “There’s cleavage coming and going!”

“I hope she’s not American—or Canadian so people will assume she’s American.”

We took the shuttle to the other Nara Station, which was closer to the temple complex we wanted to visit that morning, Kohfukuji. There were four or five buildings; all charged 500 yen, or about $5.  I settled for exterior photos of the “famous” five-story and octagon pagodas. 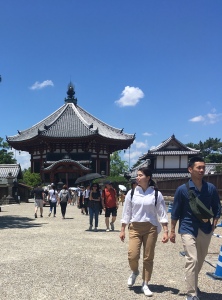 The compound was peaceful and the inner shrine was beautiful.  In the tiny shop, I noted the usual selection of book covers, notebooks, and plastic paper sheaths.  I wondered how long it would take the Shrine Gift Shop Buyers Association to realize no one buys these items anymore.  Maybe I’m wrong. Maybe plastic paper sheaths are big in Japan.

Lynn had picked out some postcards.  She opened her bulging coin purse to show the all her small change.  “Can you help me use this?”

The girl good-naturedly counted out about a hundred coins.  Lynn thanked her profusely.

Across the road was the Nara National Museum.  It looked close, but the first building we reached was closed for remodeling.  And the next.  We walked around a third building looking for an entrance, to no avail, then followed signs to an underground passage that finally led to the entrance.

There was a fantastic exhibit of Buddha statues; no photos allowed.  In the gift shop I passed on the souvenir wash clothes—another common gift shop item I wondered about—and bought Vince a notebook.  The lines were vertical instead of horizontal and I thought he’d get a kick out of that.

It was lunch time, so we stepped into the first place that was open for some soba. 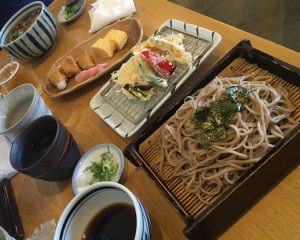 They had a soju promotion going.  Since it was about a hundred degrees outside the firewater was refreshing but may have been a bad idea because I then proceeded to pick up a guy who was half Buddha and half deer. 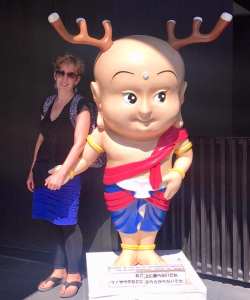 Steps away was an earthquake museum.  Here’s the simulator before I was strapped into it, where my Soju was shaken, not stirred.

Lynn recorded my ignominious tour of Japan’s Greatest Quakes.  Thankfully I don’t think she knows how to post video to social media.