Okunoin, as you might imagine from the fact that it has 200,000 graves, is vast.  There are two main paths that traverse its length, and I walked up one of them.  It’s mostly level, so one is able to take in the jumble of headstones, jizos, toriis, statues, and stupas, which in Okunoin are composed of large hewn stones representing the five elements.

You can see stupas in the background of this shot of Kobo Daishi.

There were hundreds, maybe thousands, of Kobo D statues.  I liked this one where he’s got what looks like a bowl on his head.

I stopped at a small wooden structure that contained, according to a sign, “a stone that is heavy or light” depending on whether the person trying to lift it is evil or good.  I stuck my hand in the opening and tried to lift it; it was heavy.

After 20 minutes I arrived at the lantern hall. It contains many … lanterns, 10,000 as a matter of fact.  Someone must have kept a log as they were donated over the centuries.  One in particular was called out in my brochure: “In 1016, a woman sold her hair to buy a lantern to pray for the rest of her parents.”  Why that one lantern, I wondered?  Surely over the course of millennia there must be other stories to rival the selling of hair.

The hall was closed so I walked around to see what, if anything, was beyond it.  And here was the very modest mausoleum of Kobo Daishi. Meals are served to him twice a day and from what I read that’s a tourist sight kind of like the changing of the guards at Buckingham Palace.

Suddenly sadness welled up and I started sobbing.  Where had that come from?

I heard a shuffling noise nearby and turned to see a young monk sitting on a bench in the gloaming.  I hadn’t noticed him, and I don’t like anyone seeing me cry.  I walked on.

At the midpoint of the path there was a sign that said it was good luck to walk the path clockwise.  Interesting.  I recalled walking around a lake in Minnesota with a Native American friend once, who had insisted on walking clockwise.  “It’s good medicine,” she had told me.

I had walked counterclockwise.  Which way should I walk back?  I got all confused, plus my stuffed emotions were still simmering.  There was a row of exquisite statues dedicated to the dead, one more fantastic than the next.  The drill was, you threw an offering (of course) into the water at their feet and said a prayer for your loved one.  What I really wanted was to take photos of these statues—they were the most beautiful in Okunoin, in my estimation.

But first I thought I’d step into the bathroom and that’s when I dropped my phone in the toilet and … no more photos.

Was it bad juju?  Was I being punished for not walking clockwise, or for being a smarty pants about all this mystical stuff?  No.  My cell fell in the loo because I was wearing a jacket for the first time in weeks, I wasn’t used to it and I wasn’t paying attention, and the cell slipped out of the pocket.

I have practiced meditation from time to time in order to be more focused and able to stay in the moment.  Maybe it was time to get back to it.

That night I knelt at the kotatsu, which is what I have learned is the name of the blanket-covered heated table, and researched what to do when your cell phone gets wet.  Here’s a photo of one from an online store. 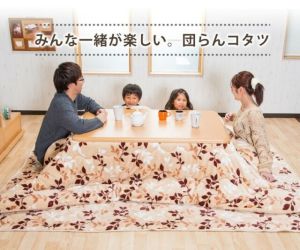 I received numerous suggestions from friends to dry my phone in rice. Hmmm … now where could I find rice?