I’ve been chronicling my month in Japan for months.  Part of me just wants to be done with it so I can move on to other topics, like living in the UK next year.

But after reading the article I referenced in my last post, about how many Japanese leaders spin the country’s involvement in WWII as passive or reactive or even as “Japan as victim,” I realize it took this much time of reflection and research to figure out what was going on and to know I wasn’t crazy.

It’s not like I expect to single handedly prevent WWIII, but if I can do even a tiny bit toward  encouraging people to be on the alert for and question nationalist narratives, well that’ll take as long as it takes.

Four years ago, I stood in a busy street in East Jerusalem with a Palestinian colleague.  He was giving me a walking tour during our time off.  I watched as flocks of school children streamed by and asked, “Do they learn about the Holocaust?”

So generations of Palestinian children are growing up thinking that Israelis—and Jews by extension—are occupying their land and coming down hard on them for no reason.  That’s a gross over simplification.  The Holocaust factored into the establishment of the State of Israel but it was only one factor.  Still.

Omar has a master’s in Conflict Studies from Coventry University in the UK.  So he got out of his local bubble for a few years.  While he is no fan of Israel, he has the background and context to critically analyze the very complicated situation in Israel and the Occupied Palestinian Territories, which I am confident will soon become a nation state.

The Japan Times article describes the weird shrine I visited in Koyasan with all the military photos and paraphernalia.  I assumed it was the work of one eccentric.  But no, denial of Japanese fault during WWII is pervasive.

The shrine aims to influence Japanese visitors, in particular school children, with a narrative in which Japan is the heroic liberator of Burma and other countries.

“This version of Japanese wartime history is now shown to legions of Japanese schoolchildren visiting Mount Koya, proving Japan’s intent to liberate Asia. From [the shrine], school children proceed to the huge cemetery, where they receive a second introduction to the parallel universe. Here they encounter the “Hall for Heroic Spirits” fronted by a sign identifying more than 1,000 martyrs, better known to the ordinary world as convicted A-, B- and C-class war criminals.”

I really liked this paragraph:  “Why can’t Japan do what Germany did, i.e., admit it was wrong and that it did some horrible things, and make a sincere apology that isn’t almost immediately contradicted by other Japanese leaders?”

On Halloween I dressed up and went to an exhibit at the Minneapolis Institute of Art about art and the Vietnam War. Or the American War, as the Vietnamese call it.  It included pieces by American and Vietnamese and Hmong artists … 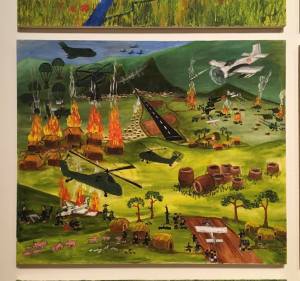 … and one Japanese artist—Yoko Ono.  This was a performance piece where members of the audience were invited to come up and cut off her clothes. 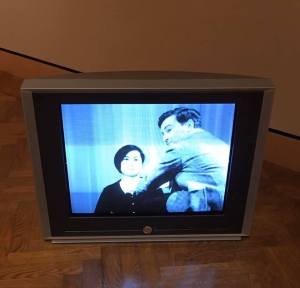 Here’s me in my Halloween threads.

Yoko Ono survived the WWII fire bombing of Tokyo, in a bunker, when she was 12 years old.  Her father spent time in a prison camp.  She and her family almost starved after the war.

Back in Okunoin cemetery, I arrived at the shrine where I had cried over my aunt the night before.  It was open now, and the thousands of lanterns created an eerie feel like being inside a holy computer or nuclear reactor.  I’ve never dropped acid, but I imagine this place would give you a good feel for what it was like.

I slept 1.5 hours that night.  Thought flashes marched through my mind: the underground tunnel in the shrine, the military photos, images from Birdsong of men being crushed underground, the Japan self-defense forces becoming an unfettered military again, Australians sent on forced marches by the Japanese in the south Pacific, the shrine with thousands of lanterns ….

So much for monasteries being peaceful.