I felt human again after a hot shower, after two full-on days of traveling.  Then Charlie took a long bath; I didn’t ask him if he scrubbed and rinsed himself beforehand.

While he was soaking, I heaved his impossibly heavy suitcase onto the luggage stand and opened it.  It sprung open and a large stuffed Siroton sprang out. 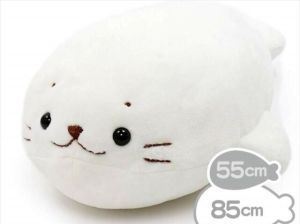 There must have been a dozen t-shirts, 10 pairs of pants, underpants, socks, jackets, and hats.  Every item was impeccably folded.  You could slide this t-shirt into a #10 envelope and mail it, I thought.  There were a dozen books, mostly manga.  Then there were the allergy medications, anti-itch cream, cough syrup, sunscreen, eye drops, nasal spray, and back-up epi pens.  I kept pulling out more stuff, wondering if there was a secret portal to another world at the bottom of this tiny suitcase.  I would never, never get it all back in.

We walked to the seafront.   Everything was closed, but all a nine-year-old boy needs to stay entertained is rocks and sticks and a body of water. 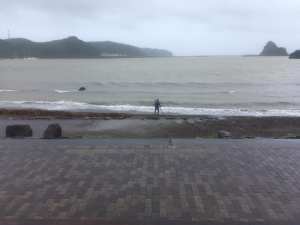 We rambled the 10 minute walk into the city center.  The rain was whipping fiercely and my umbrella kept flipping inside out.  Charlie had declined an umbrella and insisted he didn’t mind getting soaked.

It being the off season, most places were closed but we had some really fresh and super cheap sushi in a restaurant in the train station.

On our way back to the hotel we stopped at a 7/11 to buy something for breakfast. I bought smoked salmon, blueberries, and plain yogurt.  Charlie picked out five candy items.

“I let you have a gooey desert at the restaurant,” I said, “so you have to eat a nutritious breakfast.”  He looked crestfallen, slowly put the candy back, and chose a kids’ yogurt that probably contained just as much sugar.

At the checkout, we were instructed to stick our hands into a box and pull out some sort of prize ticket.  The box had photos of a Japanese heavy metal band on it.

Neither of us won.  “What would we have won?” I asked Charlie.

“I think you win candy,” he said mischievously.

This was a struggle during our time together.  I was under strict instructions to limit his sugar and caffeine intake.  I was fine with this in principal but this was his vacation—he’d worked hard in school for the past three weeks and all the touristy places we visited promoted candy, doughnuts, ice cream and all things sweet.  Charlie was compliant when I said no, with only a few minutes of dejection.  For some reason this made me feel guiltier than if he had wheedled, whined, and tried to negotiate.

Keiko had Skyped me, “Charlie says he hates Japan and never wants to come back!  There’s been so much pressure on him here, academically and socially.  I hope he can unwind and have a good time with you so his negative view of Japan isn’t permanent.”

And it wasn’t. We walked into our room just in time to see the sunset through the clearing clouds, and he exclaimed, “I don’t want to leave Japan!  I want to stay here forever!”

Mission accomplished, and it was only Day 1.

Charlie had observed me writing a post on my laptop.

“I really want to write a book,” he told me.  “Can I do it on your computer?”  Of course I said yes, but I hadn’t realized that he doesn’t know how to type and his grammar and punctuation skills aren’t great yet.  I showed him the most important thing, how to save his document.

“Of course my head is full of ideas after a big day like today,” he said.  I turned my head so he couldn’t see me laugh.

I watched Kei Nishikori at Wimbledon on TV.  He’s ranked number four in the world.  I have such fond memories of Wimbledon.

“I want to be the number one writer, baseball player, runner, and a regular dad,” said Charlie.

I read what he’d written so far.

Everybody has to start somewhere.