I’ve put off writing because I didn’t know which angle to take.  Should I document all the things I’ve seen and done in the last 10 days?  Should I write about odd happenings, like me falling on an escalator and attracting the attention of dozens of shoppers and shop keepers, all asking solicitously, “are you all right?”  (I was embarrassed and bruised, but otherwise all right.).  I could contract American and British things. I could write about the history of Oxford and its famous university, or chronicle my inner journey of relocating to another country.

All this was a good excuse to procrastinate, but to be fair to myself, I’ve been putting in a lot of work hours and keeping busy gadding about town.

I’ll start with my base, the house where I am house sitting, which affords me a sanctuary from which I emerge and explore.  I will share some photos eventually, but I want to be careful about not creeping out the homeowners.

It’s a terraced house, a typical type of housing in the UK.  Probably dates to the Edwardian era, named for King Edward VII who reigned from 1901-1910.  There are windows and doors front and back and neighbors on either side. 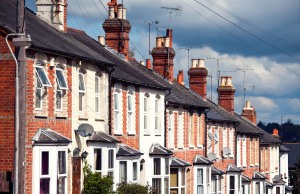 I haven’t heard much of or even seen the neighbors.  I heard water whooshing on the other side of a wall one day, a door slamming once.  Last night around 3am I smelled toast.

On the ground floor, which in America we call the first floor, there’s a living room, which they call the lounge.  There’s a dining room, kitchen, and sunroom, which my homeowner calls The Cocktail Lounge. Up a steep set of narrow stairs is what they call the first floor and Americans call the second floor.  Here there are two bedrooms and a bathroom.  In this house, the owners have very cleverly opened up the rafters to build a loft office.  Getting up there involves climbing an even steeper set of stairs.

There’s a back garden, which in America we call the back yard.  With terraced housing back gardens are very long, narrow spaces.  In my case, the back garden has been bisected by a fence.  The front half is for people and the back half is for chickens. 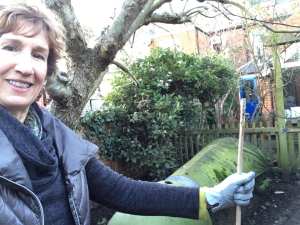 Yes, I am tending four hens who my homeowners rescued from a laying factory.  They make adorable noises like “bwaaaaaaa, buh buh buh” and the usual clucking.  Every morning I go out to collect one to three eggs.  I let the hens out to free range and top up their food and water.  Once a week I clean out their little house and hose down the sidewalk that has become mucky with chicken poo (Americans say poop—why?).

One of the hens is hen pecked by the others.  She has hardly any feathers except on her head, which makes her look like a little pot-bellied naked person wearing a chicken-head costume.

There are also three cats, one of whom rarely makes an appearance.  They poo outside so I don’t have to deal with a litter box.  They have a smart cat door which reads their microchips and won’t open to neighborhood cats.

My seven housemates are low maintenance.  Caring for them gives me a little routine to ground myself each day.

I live a half hour walk from Oxford city center.  Since my arrival I’ve walked at least an hour a day just to get around.  I could take a bus, but why, if I am able to walk?

There is so much going on here, and it’s cheap or free if you look.  The highlight so far was a free concert at Christchurch Cathedral.

The program was Chopin, and the pianist played the funeral march from Sonata Number 2.

This piece has become almost a joke, but if you listen to the whole thing you will hear it is not only a beautiful piece of music but a celebration of life with all its ups and downs and frustrations and joys.

Which pretty much sums up my life so far.