The Borghese, pronounced borrrr-geh’-see-ah, was once a private estate originally owned by a cardinal who was the nephew of a pope.  There was a lot of money to be made in the Catholic Church 500 years ago, which is partly what sparked the Reformation.

The gallery is one building in a sprawling complex.  There was the villa itself, where successive owners lived before the last ones bequeathed it to the state.  There were parks filled with statuary and fountains, and then there was the gallery.  I didn’t see the villa, but I imagine it isn’t too shabby.  So if you were lucky enough to live here in the 17th Century, the gallery was your own private art museum.

My group of a dozen New Yorkers, Floridians, Hoosiers, Ottowans, and one Dutch couple were led around efficiently by our guide, Mario, who said he was an art student.  He was around 35, so I think he may have meant he was a lifelong student of art.

The first room featured a sculpture by Bernini, the Rape of Persephone (by Hades, the king of hell).  According to Mario, they “lived happily ever after.”  Really. 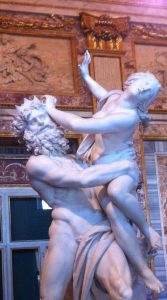 Despite the repulsive subject, I couldn’t help but marvel at the lifelike bodies carved out of a block of solid marble.  Look at Hades’ fingers sinking into Persephone’s flesh. 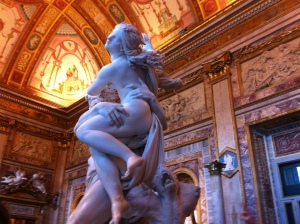 The Rape was the centerpiece in the room, but every inch of the room was covered with art.  Even the walls, floors, and doors were works of art because they had been painted to look like marble or other precious materials.  I wondered how much just one of the friezes above the door would be worth, and what anonymous artist had produced it.

In a hallway, there were these 3D murals on the ceiling: 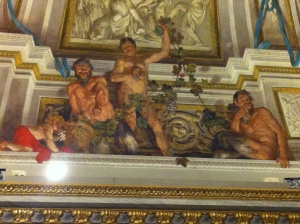 The next room featured another guy (Apollo), who couldn’t keep his hands off a woman (Daphne) who had said “No.”  She pleaded for help to her father, the river god Ladon; and he turned her into a tree.  How did Bernini know where to start?  How did he carve the arms and fingers without cracking one off? 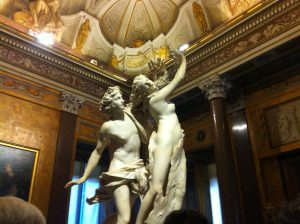 We passed through an enormous room that was closed for renovation, but we stopped to appreciate the ceiling; this is one small section: 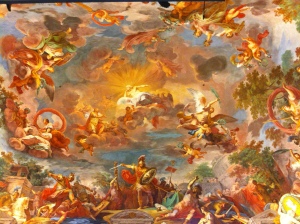 There was a sculpture of Napolean’s sister Pauline, who was married to a Borghese for the political alliance. Note the wrinkles in the marble “mattress.” 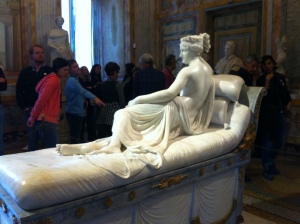 Then there were the paintings by Caravaggio.  This one had been banned because it depicted Mary with cleavage and was unflattering of her mother, Anne.  Full frontal male nudity, I guess, was not a problem. 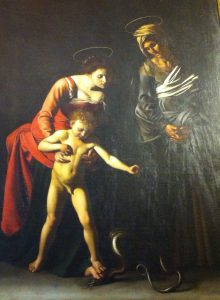 Continuing along the rape theme, there was this painting of Susanna being raped by the elders. 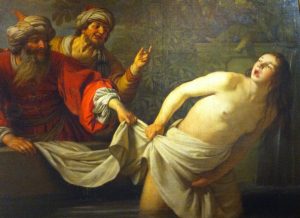 The painting below depicts a virtuous vs. sinful woman. It’s not what you think—the naked one is virtuous because she isn’t hiding anything.  You know us women–always keeping important secrets from men. 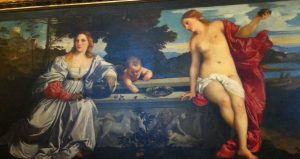 After an hour and a half, Mario said we could walk around by ourselves until our timed ejection at 2pm.  I had read about a statue by Bernini called The Hermaphrodite—female from behind, male in front. Mario had led us past it without comment and it was pushed against a wall—for modesty’s sake?  Was male nudity deemed unseemly when it was an adult?  But there were plenty of other statues of naked men throughout the gallery.  Was it because of the gender fluidity of the statue? 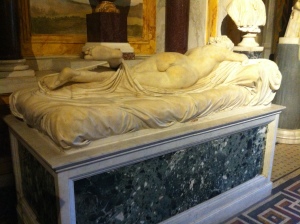 I had not expected to encounter these themes of rape, of women being objects for barter and use by men, and of the mixed attitudes toward nudity. Aside from The Hermaphrodite, I didn’t go looking for any of these works; they were highlights of the gallery featured on the tour. Mario didn’t interpret or make any sociopolitical commentary.

Open a newspaper anywhere, any day, and there will be stories about rape and human trafficking and women being killed by stalkers. I’m not one to say “nothing ever changes.” The world is safer and saner in many ways than it was four hundred years ago.  But art suggests that human nature, emotions, and impulses don’t change.

This is a series of posts about Italy, Malta, and Spain that starts here.  I’ll be posting every other day for a while until the travel posts catch up with real time.

After five hours in the Vatican Museum, St. Peter’s Square and Basilica were anticlimactic.  The square was … well, a square, and it was filled with white plastic stacking chairs.  There were also plastic ropes demarcating lines this way and that like you would see at Disneyland.  I didn’t bother trying to photograph it because there was no way to capture how big it was without plastic paraphernalia in the way.  St. Peter’s Basilica was … huge, of course.  Maybe, after the glorious collections of the Vatican Museum, I was just beyond being wowed any further.

I did make tremendous progress on a census of nuns and priests I had started upon my arrival.  But it was the Vatican, after all, and I lost track when I reached 12 nuns and nine priests in less than an hour.  This was more nuns and priests than I had seen in the previous 30 years of my life.  Almost all of them appeared to be from the developing world.

The hotel desk clerk had been right, there did seem to be a lot of Argentinians around, drawn by the Argentinian Pope.  I could hear Spanish everywhere.  Its cadence was like a relentless rat-a-tat-tat, whereas Italian was more circular.

This may sound cliché and insensitive, but it’s true.  I didn’t see one obese person aside from a few Americans, who were clearly distinguishable by their sloppy sweats and athletic shoes.  Why are we such slobs?  You can’t even go to an orchestra performance anymore without half the people wearing jeans and sweatshirts with sports logos.

By contrast, the Spaniards and Italians were impeccably dressed—the men with flawlessly-shined dress shoes, women in heels and skirts, everyone in black finely-tailored overcoats.  The women had clearly made an effort to style their hair and accessorize.  Many of the men wore hats.  Not baseball caps—real dress hats like real men should wear.  Boy do I sound old.

What did I wear?  I compromised comfort and style by alternating between two black and grey outfits topped by a silver puffer vest with zip-able pockets, one of which was inside; a secure stash for cash and cards.  I switched my Dr. Scholl’s gel inserts between black boots and a pair of black Coach shoes that were really trainers but looked dressier.

I took the subway back to my hotel, thinking I would nap but I couldn’t.  I boomeranged back out into the streets and wandered around, eventually eating dinner in a tiny ristorante where the first of many waiters asked, “Only one?”

I had a ticket for the next day for the Borghese Gallery, which I’d never heard of until I started reading “Top 10 Rome” lists.  The ticket purchase required me to choose a seat, as if I were going to a concert.  Sometimes just buying a ticket is an adventure in itself. 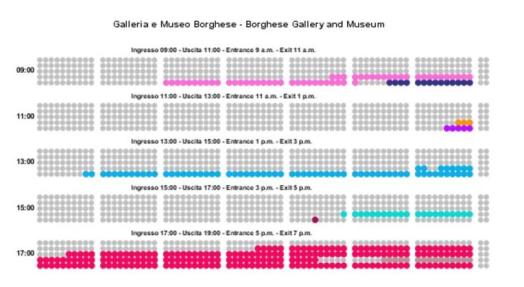 My emailed ticket listed three different entry times and an exit time, so I wasn’t sure if I had booked a tour, a concert, a museum, or what.

I got to there early which was good because the place was run like a Swiss clock.  I waited in line to exchange my emailed ticket for a fancy one: 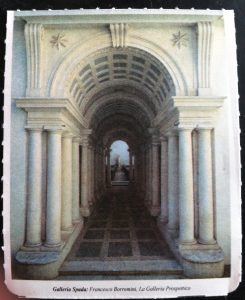 I never saw this passageway.

I got into another line to check my coat and bag, which was mandatory.  Then, being sensible, I waited in line for the bathroom, then got into line for the tour.  All of this took place in a cramped underground room with a hundred other people trying to figure out what they were supposed to be doing.

Finally it became clear to me that the tour was mandatory—you couldn’t wander through on your own and you were required to leave at the time indicated on the back of your ticket.  We all got radio receivers with headphones so the guide could talk at a normal volume.  At precisely 11:10 am, my group—Group 11—followed our guide to a fifth and final line where a guard scanned our tickets and then on into the gallery.