As we waited for sunset, the Aussies in our group fell into an animated discussion about the Arnott’s Shapes biscuit (cracker) controversy.

The rest of us listened, bewildered.

“They changed Shapes, to make them ‘new and improved,’ and people went mental,” said the British-Australian guy.

“Shapes are like our National Cracker.  They never should have messed with them,” his wife rang in.

“Arnott’s, the company that make them, had to back down and promise to keep the original formula,” said Heidi.

There was more in this vein.  I kept my eye on the rock and knew better than to make a fuss over the quails or partridges or whatever the birds were that were running around pecking up the cracker crumbs.  They were exotic to me, but probably as common as dust to Australians.

A little girl danced nearby the way little kids do, like grownups do when no one is watching.

The sun set and it was just “meh,” so we climbed aboard the bus and were driven to our campsite.

When Heidi had booked the tour she warned me that it was “stupidly expensive.”

“And the next day I found another tour company with basically the same package, for half the price!  But Intrepid wouldn’t let me cancel and get my deposit back.”

“So is it glamping?” I asked, given the high price tag.  “Is that the difference between the two tours?”

“Oh no,” Heidi laughed.  “It’s not glamping.  It’s just stupid expensive.  But we won’t be sleeping on the ground; there are tents and cots.”

So I had no idea what to expect, but our campsite and the set up was pretty nice, by my camping standards.

There were latrines for men and women nearby, with flush toilets and showers with hot water.  Really pretty posh, if you’re used to camping in a tent on the ground in a sleeping bag.

There was a chow hall, and a cook named Katie with long dread locks who magically appeared, prepared great meals for 16 people, cleaned up, and disappeared.

Upon our arrived Katie greeted us with a buffet of burgers, veggie burgers, kangaroo steaks, home potatoes, and salad. There were a couple long tables set up outside, dotted with wine bottles.  We wolfed everything down and then moved to a bonfire Katie had started nearby, sitting split logs and drinking more wine.

“That’s it, ladies and gents!” Meg exclaimed from some distance away in the darkness. “I’m turning in because we’ve got to leave here tomorrow morning at 5:15.”

There were groans and exclamations of dismay and surprise.

Heidi was smart and went to bed early.  I was not.  I sat up yammering with the British-Aussie couple and the jumping Germans and drank more wine.  Darren and Kylie, the Aussie pair from Melbourne, sat nearby drinking and chain smoking.  Then Kylie went to bed and Darren hovered near our group.

“Come join us,” I said, and he inched closer.

Hmm.  So she wasn’t his mother.  She looked older than me, and Darren was my son’s age and extremely buff.  But no one else seemed nosy about their relationship. We all wished him a happy birthday and turned in soon after.

After a quick brekky (as the Aussies say) and a few gulps of coffee, we were off to see Ularu at sunrise.

There was more groaning when Meg explained that we would be walking around the rock, which would take around two hours.  I was happy to get some exercise; I am not wired to sit.

And so we walked around the rock, and it took two hours because we stopped every five minutes to take photos and admire the changing colors.  Actually, the best views were opposite Ularu, in the bush. 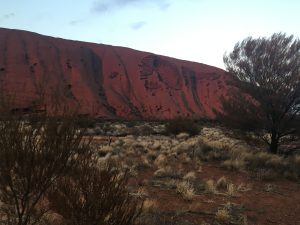 James, the unemployed cook, walked near Heidi and me and we made efforts to converse but he was skittish.  As we approached some kind of gigantic hollowed out formation in Ularu, he spontaneously pronounced, “A frog!” 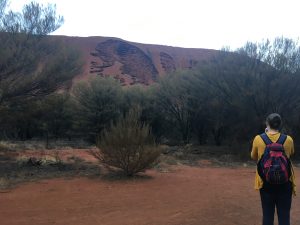