Are you familiar with the Morrissey song, “Throwing My Arms Around Paris?” I hear it in my head sometimes when I am throwing myself out into a city—joyfully embracing as much as humanly possible in however much time I have.  The actual song is a downer, obviously—it’s Morrissey after all, the miserablist. But I re-mix it in my head to be uplifting.

I visited the RBG every day for three days.  There’s that much to see and do, and it’s just a lovely, peaceful oasis in the middle of the big city.

On my first day I caught a walking tour.  The morning was fresh from a night rain and the sun had not yet burned the heavy dew off the leaves.

My group included some Canadians, Melbournians, and Germans.  The guide was giving her first tour and said she was nervous.  She was still getting used to holding laminated photos of flowers and referring to them; they were upside down for her.  She was doing her best but kept saying, “I’m not sure about that, I’ll have to check it later.”

She thought this astounding tree was from South Africa.

After 20 minutes I carved off into an inviting-looking dark path through thick trees.  Have I mentioned I was enamored with the trees?  I emerged to see this banyan with knobs drooping downward; they would become buttresses for the growing tree.

What I hadn’t expected to find in a garden were story lines about three important populations in Australia’s history—explorers, Aboriginals, and convicts.

There was a garden named for Daniel Solander, a Swede who sailed with Captain Cook on The Endeavor around the Pacific and collected 17,000 species of plants, 900 of them from Australia.  Most of those were found around Botany Bay, just five miles from where I was standing. 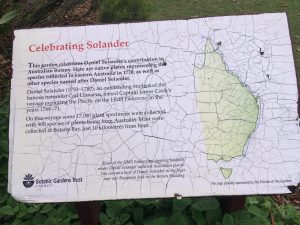 He did this 70 years before Charles Darwin made his famous voyage on The Beagle. Solander didn’t live to read Darwin’s Origin of the Species; he died suddenly of a brain hemorrhage at age 49.

Next I crossed what appeared to be a dinky, unremarkable bridge over a tiny stream.  But no!  It was built over culvert of “high cultural significance” built by convicts in 1816 so the Governor’s wife could cross the stream in her carriage. 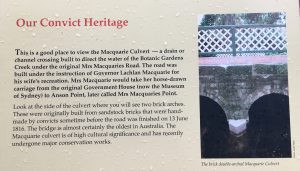 I turned around to find about 15 placards about Aboriginal history.  I already knew about the 1967 vote in which white Australians decided to count Aboriginal people in the census for the first time.  I guess it took that long for them to decide that Aboriginals were actual humans.

I didn’t know there had been a Freedom Ride in Australia in 1965, similar to the ones in the US about five years earlier. 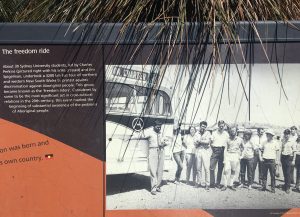 I was pleased to see that one of the leaders had a Jewish name—Spigelman.  When I Googled him I learned he had immigrated to Australia from Poland as a three-year old with his parents, who were Holocaust survivors.  His parents are featured in the graphic novel about the Holocaust called Maus, by his American cousin Art Spiegelman.

Spiegelman was born in Sweden after the war.  His five-year-old brother had been poisoned by their aunt, who then poisoned herself, in order to save them from being taken by the Nazis.  It gets worse, believe it or not.

I have Maus sitting on my bookshelf.  If everyone was required to read Maus, and Kurt Vonnegut’s Slaughterhouse Five, I wonder if we would ever have another war.

Spigelman went on to become an Australian Supreme Court Justice and patron of many humanitarian and arts causes including the UN High Commissioner for Refugees.

It’s no surprise that Jews are overrepresented in human rights causes.  But why should it take something as horrific as surviving a Holocaust to motivate people?

Lastly, I was moved to tears to learn that Australia has a National Sorry Day, which “gives all Australians an opportunity to express their sorrow” about the stolen generations of Aboriginal and Torres Strait Islander children who were forcibly removed from their families “for their own good.” 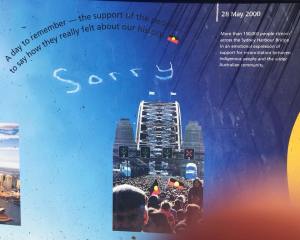 Wow, who expected so much sad stuff in a botanical garden?

I hastened toward a more uplifting exhibit, about carnivorous plants. 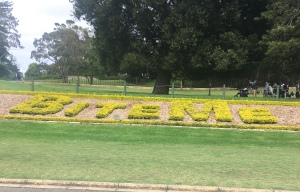