I am now fully settled into my house-cat-chicken sitting and remote-work gig.  I guess I’m what is now called a digital nomad.

I have crossed some hurdles that I dreaded.

How would I ever figure out the trash and recycling system?  Just look at the “helpful” aids! 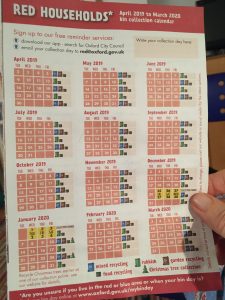 I did it, but the hardest part was getting it through my head that the green bin is for trash, not recycling.  All my life, green has equaled recycling.

I like how the A to Zed wheel suggests composting tissues.  I use a lot of tissues.  My nose starts running as soon as winter comes and drips continuously through May.  But I will not be composting my tissues.

Laundry.  I made the mistake of putting in a load of sheets and choosing the Cotton setting.  Four and a half hours later, they were done.  From now on I’ll use the Super Speed setting for every load, which on this Samsung machine still takes an hour.

I am a good foot shorter than the home owners, so I have had to stand on a footstool to hang laundry in the spare room that’s set up for that.  I couldn’t find the light switch for the cocktail lounge, and finally messaged one of the owners about it.  It’s located just above my head so I couldn’t see it.

A bigger psychological and financial hurdle was joining a gym.  I finally settled on FeelFit, which seemed to be the cheapest and closest.  It still cost $80 for one month. On the website it claimed to have state of the art equipment. Yep, state of the art for 1987.  The treadmills have dot matrix displays!  The weight machines take me back—I feel like I’m in a museum of weight lifting equipment.

The gym is in a mall in a very chav (low rent) district.  Lots of teen mothers hanging around smoking.  Lots of young men with tattoos on their necks and faces and wearing all black.  Many very obese people buying packets of crisps (potato chips) and biscuits (cookies) and giant bottles of Coke.  If I walk home, the neighborhood is also run down and it’s depressing.

I figured out how to take the bus so I can bypass the run-down people and houses and get in and out quickly.  The bus is expensive, about $5 for a one-mile round trip.  So on top of $80 I’ll spend $40 to get to and from the place twice a week.

I’m just going there to lift weights, and I’m thinking of it as a trip down nostalgia lane.  I’m actually enjoying it because it’s hilarious and hey, the old machines do the trick.  Weight is weight.

I have committed to two yoga classes per week.  One is a new format called Tara Yoga that is new to me and quite a workout.  It’s taught by different soft-talking people each week.  On Fridays I do Iyenegar, my favored type of yoga, with a guy named Toby.  He kind of yells at us, “No, Penelope, no, no, no!  Pull your bum back and tuck in your tum!”  I would pay just to watch him yell at people.  I brought Toby a half carton of eggs last week and that seemed to mellow him out a bit, at least towards me.

I’ve run into a few finance snags.  Toby wants to be paid by standing order, which means an auto deducted payment on the first of each month from a current (checking) account.  This would require me to have a British checking account, which ain’t gonna happen.  I tried to hand him cash and he recoiled, “I certainly don’t take cash!” Not sure what that was about.  We compromised with PayPal.

I’ve been unable to deposit a check using the fabulous Zelle mobile app because it doesn’t work outside the US.  Foiled!  I had to mail it to my US bank, hoping it doesn’t get lost between Royal Mail and the USPS.

And now, some food photos.

The obligatory fish and chips. 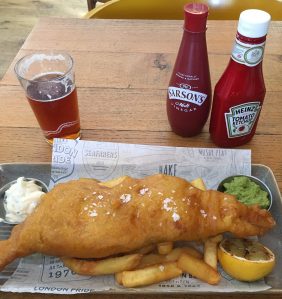 It’s easy to be vegan in Oxford. 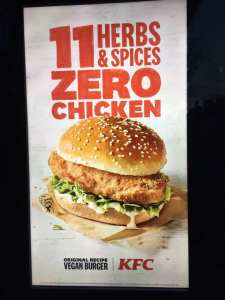 You could eat cock instead of chicken

But burgers with onion rings and chips (fries) are better.

Lynn exclaimed from the darkness on her side of the room, “Whoever thought it was a good idea to have a gravel driveway in a hotel?!”

“I know!  Well at least no invading armies are going to sneak up on us.”

There was no going back to sleep now so we went down to breakfast. I ordered kippers, which I’d had never had, and Lynn had a Full English minus the blood sausage.

Blood sausage is just what it sounds like, sausage made of blood.  I think it’s a food that’s traditional and no one really likes it but they keep it on the menu for tradition’s sake.  Most Brits I’ve mentioned it to made a horrid face.  Is it like lutefisk or gefilte fish?  No one likes either one, but people put it out once a year because it’s “tradition.”  Blood sausage is on the menu everywhere, so I don’t know, maybe lots of people love it.  What do you think? 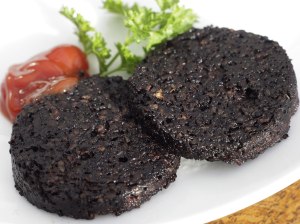 Me, I love fish, so I was happy with the kippers.

The Daily Mail had this cover in regard to the Grenfell Tower fire:

I think the Queen learned some lessons in the aftermath of Princess Diana’s death, when she was accused of being cold.  Maybe she can give Theresa May some pointers about getting down with the people.

We walked into town to Shaftsbury Abbey, or what was left of it.

The abbey had been a regional center of power until Henry VIII had it destroyed along with all the other monasteries in the 16th Century. The piles of stones on either side are where the pillars of the nave were.

A small display inside the visitors’ centre featured a few shattered carvings, remnants of painted sculptures, and a diorama of what the abbey had looked like.  It must have been enormous and fantastically beautiful.  Henry VIII was known to appreciate beautiful things, so why destroy the abbey, down to the ground?  Why not just seize the gold candlesticks and leave the building with its gilded arches and ornate carvings?  It was a display of power, of course.  He had half a dozen of his own palaces, so a couple hundred monasteries out in the sticks were no loss.  He was a red-headed megalomaniac who loved his palaces and couldn’t stand for anyone else to … wait, why does that sound familiar?

Here are the names of some of the abbesses.

It was lunchtime  and we picked our way carefully down Gold Hill to find a pub someone had recommended.

I had one of the most memorable meals of the summer at this pub, a fish pie with turmeric. 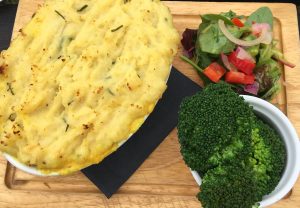 I tried to replicate it once since I’ve been home but didn’t get it right.

Of course what goes down must come up—no, I didn’t vomit up the fish pie—we had to walk back up the hill.

We walked a few paces, stopped to take photos, then walked some more. 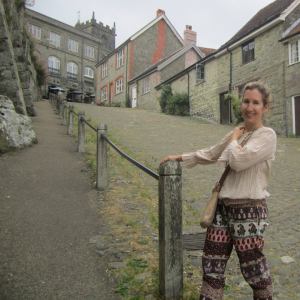 It’s not that we couldn’t have hiked straight up the hill without a break—really.  But it is true that a summer of fish pies and pints means I really need to get back to the gym.  Maybe tomorrow.  Maybe next week.

Next we visited the historical museum.  Shaftsbury was once a center for cottage industries, which just means people sat in their cottages and made things, like buttons. These are the forms and the finished buttons.

In the 17th and 18th Centuries thousands of women and children were employed making “Dorset Buttons.” The button-making machine caused these cottage industries to collapse after 1750, and the gentry “helped the unemployed workers to emigrate to Canada and Australia.” That’s one way to solve your unemployment problem.

FYI, I’m going to DC for work and won’t be blogging for a week or so.