I had read about Taro’s cooking classes in Fodor’s Easy Guide to Tokyo, Kyoto, and Western Honshu.  These easy guides condense monumental travel planning into one succinct guide.  I had found the Australia version immensely helpful.  For them to include this cooking class said a lot; the guide said it was the highlight of many visitors’ trips.  It was certainly one of mine, if not the only one.

Taro had made it clear in our email communications that he is not a professional chef, but a passionate home cook who loves to share Japanese cooking and culture. He told us a bit about his background.

“My father’s company relocated us to America when I was nine,” he said.  “He could have moved us to Seattle or some other place with lots of Japanese, but he purposely chose Virginia where I was the only Japanese in a school of a thousand kids, so I learned English quickly.  It was a good idea of his.”

He asked about our impressions of Japan so far, and I mentioned how quite it is.  It was Taro who explained this was about harmony and getting along with others.

“Ah … that was, that was about colonialism,” Taro said as he got us chopping.  “Japan saw Britain and America invading other countries and didn’t want to face the same fate.”

I have no idea if that’s accurate.

He encouraged us to ask him anything we liked about Japanese culture or food.  Taro had started cooking in high school because he was a picky eater and wanted to control his own food.  This morphed into cooking for his family and friends, and now he eats almost anything.

I told him about the chicken chops.  He explained that chicken is raised so cleanly in Japan that there’s no need to cook it thoroughly, and in fact raw-ish chicken is considered a delicacy.  Hmm.

He gave us a hand out and an overview of our 3-4-hour lesson.  We would learn how to combine kombu (seaweed) and bonito (fish flakes) to make dashi, a base used to many dishes.  We would also make a Japanese omelet, stir-fried root vegetables, and wagu beef.

I told him about my misperception that Japanese eat sushi morning, noon, and night.  He said he makes sushi for his family about once a month.  “It’s just one style of Japanese food.”

Taro walked us through the various seasonings like miso, soy sauce, sake, mirin, and of course, dashi. He pulled out the beef and its certificate of authenticity.  He talked at length about Kobe Beef and Wagu beef, none of which I remember.

He got Lynn up and cooking at the stove.

Taro’s wife and two young daughters came home.  As kids do, the girls immediately turned on cartoons and sat glued to the TV.

Taro had been teaching cooking for 10 years. He had also tried distributing an oil bottle that had a built-in brush in its cap; it sounded like there were 10,000 left over in his spare room.

“I want to focus more on teaching culture,” he said.  “That’s my next venture.”  It seemed to Lynn and me that cooking was an excellent gateway to teaching about culture.  “It’s hard to imagine people paying the same price but not getting a meal,” Lynn commented later.  I agreed but wish him well.

This was our meal.

Taro left us to eat while he and his wife busied themselves elsewhere in the house.  Then he emerged to collect our fee.  When I had inquired about the class I had said we would be open to either the vegetarian or beef version.  He chose the beef version for us, which cost $82 vs. $64 for the veggie option.  It was well worth it.

Taro gave us good directions back to the bus stop.  It was pouring and the bus was packed.  Lynn and I clung to the straps.  Sitting below me, a little boy in a Spiderman costume kept saying, “Hah-loh!” to us shyly, as he leaned against his grandma.

That evening we had a modest tempura ramen and sake, then slept well because our neighbors had moved on. 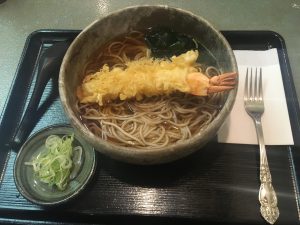