While the minutes ticked away as we waited for our driver, I talked to the hotel receptionist in Spanish.

“You liked Medellin?” she inquired, clearly proud of her city.

“Yes,” we loved it,” I replied.  “It’s nice that this hotel is so close to Park Lloras, because everyone knows where it is and that made it easy to get around.”

Actually, I probably said something like, “This hotel it nice close by Park Lloras, because all people are wise about it and it was much easy for to travel around this place.”

She gave me a blank look.

I had done it again—in addition to my crap Spanish, I had called it Park Lloras, which means Crying Park, instead of Park Lleras, its name.

“I meant Park Lleras,” I corrected myself. What a difference one little letter can make.  The evening before, Lynn and I had hailed a cab back to the park to meet Roxana and Ricardo.  I told the driver we were going to Park Lloras.

“To where?” the driver asked.  I repeated the wrong name several times, slower and with clearer enunciation.  How could this guy not know about Park Lloras!  He must have figured out what I meant because he laughed and turned the radio up to drown me out.  It took almost an hour in rush hour traffic, but he dropped us off in the park.  The park, as in a deserted wooded area a few blocks from all the bars.  It had grown dark and was pouring rain, but we got where we needed to go in the end despite my best efforts at speaking Spanish.

About an hour later it suddenly hit me what I had been saying; I told the group and they had a good laugh at my expense and we all started laughing about how there could have been a place called The Crying Park in that old movie The Crying Game.

Responsible Travel kept messaging me to say they were working to find our driver.  By now he was almost an hour late.  I told them we would call a taxi.  Then there was a knock at the front door of the hotel, which was kept locked, and there was a man with a van.

He was young and had braces; his hair was wet and his clothes were damp but impeccable.  The van was deluxe and appeared just-bought.  He wasn’t in any hurry until the receptionist explained the situation to him with much urgency and arm waving.  Apparently he hadn’t been briefed that we were running an hour behind.

And so he drove fast, and texted nonstop.  He had placed his phone on a dashboard holder, but still—we were going 50 or 60 mph on winding roads overlooking steep cliffs. Every few minutes he would jerk the steering wheel to keep us from drifting into the oncoming lane or the cliff edge.  Lynn and I, through a series of silent facial expressions meaning, “We’re going to die!” to “We have to get to the airport!”, agreed to let it pass.

Then he pulled over onto the side of the road.  Was this it?  Was this the real Medellin, still full of criminals and murders?  Was this where he robbed us and buried us in a shallow grave?

Instead, he spoke into his phone, then turned it around to face us in the back seat.  A canned-computer-generated voice translated, “You must pay 60,000 pesos for this ride.”  He beamed at us, proud of his app.

Just think.  On the positive side, you may never make a mistake speaking another language by using a translation app.  On the negative, you’ll never know the exhilaration of trying to master a language.  And you’ll never have the laughs from making mistakes.

I explained, more cautious to get my Spanish correct this time, “We already paid the tour company.”  He was off like a bullet again, this time yammering with the phone to his ear to confirm we had paid, swerving as he drove one handed.

This was the most memorable thing in the airport: screens over the sinks with ads and public health messages.  Ugh. Is there no escape!?

This is the third post in a series about studying Spanish in Mexico that starts here.

And so I arrived in Cuernavaca, Mexico, to drench myself in Spanish language and culture for a week.

Through this company, Amerispan, I had bought a cheap package that included my classes and a homestay. I had splurged and spent an extra $40 or something for someone to meet me at the bus station and take me to the school. I made that call after seeing that the school was called Cemanahuac. What?! That didn’t sound Spanish, and I had no idea how to pronounce it. Now I see that they’ve added a helpful transliteration to their website: sem-ah-NOW-ock, and I can tell you that was the name used by the Aztecs to refer to their world.

For the umpteenth time I apologize for my lousy photos: 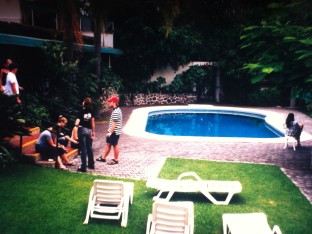 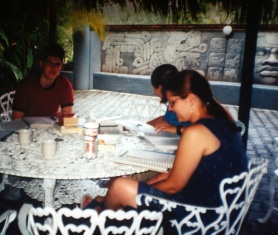 If you live in Indonesia or El Salvador or anywhere else that is tropical, you won’t think anything of this place. But to me, coming from a cold, drab grey Minnesota winter, it was paradise. I could hardly believe that I was going to spend a week studying here. I would have been happy to skip the studying and spend the week lying by the pool with a book.

Amerispan no longer lists Cemanahuac as a language school choice on its website. That’s sad, and I wonder if it’s due to all the drug gang violence, or something else?

I wandered around the school, probably with a dazed smile on my face, until someone called my name: “Anna Mah-eeeertz?” I don’t know how long they had been calling it before I realized it was me.

I knew from studying up on the Amerispan website that someone from my host family would come to take me to the home, but now I had left English behind—completely. That was their philosophy, total immersion.

But it wasn’t too hard to figure out that the secretary of the school was introducing me to a woman whose name was apparently Mierda. I could see the other office employees behind her, laughing up their sleeves. I would learn eventually that Mirta was Cuban, and that Mirta was a Cuban name. But she pronounced it Mierda and in Mexico and elsewhere Mierda means shit.

Mirta seemed oblivious to this, and as I got to know her better over the course of the week I found she was one of those happy, smiling people who just ignore bad things. Mirta was about 60. She was plump in a matronly way, with dark red hair, and she was dressed like my grandma used to dress in the 70s—in polyester elastic waist pants and a button up shirt—both in pastel colors, and sturdy black shoes.

She pointed toward the exit and said what sounded like, “Yabba da dabba da blabba de doo.”

All I could do was smile and nod; I didn’t even know to ask, “Que?” and even if I had I couldn’t have understood the answer. I followed her out into the street.

She walked so fast I had to hop skip to keep up with her. We reached a corner and she pointed to a bread store and said something. Then we turned, turned again at the next corner, walked about three more blocks, and while she talked and pointed to things along the way. We came to a crazily busy intersection where she stood for a while talking and gesticulating some more, until a mini bus arrived. She pointed to above the windshield, and I could make out a number and what I assumed was the month of Noviembre. Why would a bus route be named a date? I followed her on to the combi and she showed me the coins I had to pay, which meant nothing to me.

This was my introduction to the wonders of combi décor. There were several small statues of the Virgin Mary glued to the dashboard, the rest of the surface was covered in orange fake fur, and there were holy cards suspended above the driver’s head. We needed all the good-luck juju, for sure, as the bus lurched out into the stream of traffic.