I wrote a post with this same title three years ago, when I went to Jordan, Israel, and the Palestinian Territories for work.  My Palestinian colleague and I met with dozens of activists who told us about the terrible prison conditions, torture taking place therein, and the oppressive regimes (both Israeli and Palestinian) under which they live.

Meanwhile, back in Minnesota, my son was in Moose Lake Prison, from which I had just been ejected because I was wearing a “low-cut blouse.”  This was the worst day of my life in the last three years.

All Omar knew about me was that I was a white, Jewish, middle-aged woman from Minnesota.

“My son is in prison,” I informed him at what seemed like an appropriate time.  I told him about being thrown out.  “I don’t think they know who they’re up against,” I said. “They’re not gonna know what hit them once I get back.”

It turned out to be the other way around. A letter from the Department of Corrections—basically a six-month restraining order—was waiting for me when I returned.  I tried to fight it but the DOC has complete discretion and hides behind the term “Security Issue.”

Yep, I was a big threat.

I think Omar realized I wasn’t some dilettante coming to “save” the Palestinians—what we refer to in the NGO world as just White Women With Scarves.

Part of touring Colombia with a company called Responsible Travel is that you get guides with deep knowledge of socioeconomic and political issues.

So on our first day, in Bogota, Lynn and I got an earful from our guide, Michael Steven Sánchez Navas.  Often I will use pseudonyms for people to protect their privacy, but in Michael’s case I am intentionally using his real name in hopes that transparency with protect him.  Lynn and I have both friended him on Facebook, and it appears he does the same with every tourist he encounters.  Maybe many global sets of eyes on him will put a check on anyone who doesn’t like what he has to say.

More about this later, but for now I’ll just say that this vacation seems like it happened a year ago because I came back to work to find we’ve got three proposals for Iraq due within a month.  Another organization is the lead on all of them, which is great, but it’ll still be a ton of work.  It’s good thing.  But it’s all Iraq, all the time, and all I read and hear about is prisons, torture, rape, and war.

But first, let me back up to something less depressing, the Casa Deco hotel.  As the name implies, it’s a deco-era hotel located in the Candelaria neighborhood of Bogota.  It’s got a lovely lobby with no elevator, but a helpful employee hiked our cases up to the second floor.  It was Lynn’s turn to do a small double take—since in her hemisphere the second floor is the first floor. 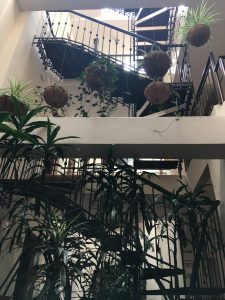 I have most of these plants at home, but they are at most 12 inches, not 12 feet, tall.

“The owner is Italian,” said the guy lugging our luggage.  This was by way of explaining why the hotel was full of reproductions of work by Gustav Klimt.  Klimt was Austrian, so this wasn’t really an explanation, but we were tired so we didn’t press. 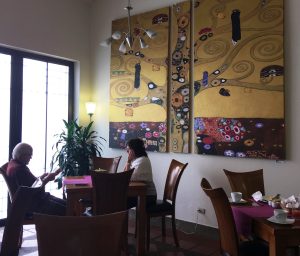 There was one bed.  The hotel guy quickly folded down and made up the couch, which turned out to be a hide-a-“bed.”  I claimed it, seizing my chance to make up for the times Lynn has sacrificed by taking the bad bed.

I had double checked with our tour agent that there would be two beds.

“Lynn and I are good friends,” I had written, “but not that good.”

Besides, the thrashing around I do to relieve my restless legs would drive Lynn (or anyone) crazy.

And it was bad.  Hard as concrete on one side, lumpy with a big dip on the other.

But so what?  You can get by with little sleep for a couple nights.

The art above the bed was more likely to give me nightmares, if I looked too closely.