We are finishing up week three of our lockdown in the UK.  When it was announced, the Prime Minister said it would be reviewed after three weeks.  Signs are, restrictions will not ease up anytime soon.

I limit myself to scanning the headlines of the New York Times, BBC News, and Minneapolis-St Paul Star Tribune every morning.  I can literally feel my heart start pounding faster and my palms sweating, so after reading one or two articles, I force myself to move on to something else.

Later, I can’t resist tuning in to the Downing Street Daily Coronavirus Briefing.  You may have heard that the PM, Boris Johnson, was hospitalized for coronavirus.  He was just the best-known figure outside of Britain.  Every day there’s a different line up of authorities.  One day the chief medical officer for England is on tap, the next day he’s gone because he’s got the virus.  Ten days later he re-appears, but in the meanwhile he is replaced by the health minister, who disappears and is replaced by the secretary of state for health and social care, who disappears next, and so on.  It’s a bit disconcerting but also gripping television drama.

Every evening they show a series of graphs. I don’t know if this is being done in the US.  I can’t bring myself to watch he-who-shall-not-be-named.  Reading about his gaffs and lies the next day is bad enough.

When I look at the trajectory for US deaths, it looks bad, right? This is one of the things that compels me to watch the briefing—I want to see if any of the lines have changed course. 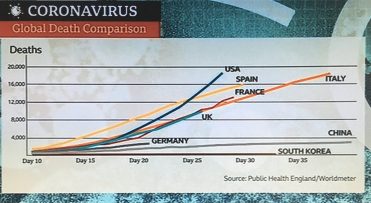 It could be worse.  In the past year I happened to read two books and a short story about post-apocalyptic worlds.  I made a list of all such books I have read, and here it is, in case you are looking to scare the b’Jesus out of yourself—or make yourself feel better about the current pandemic.

Station Eleven, by Emily St John Mandel. This is the book that most closely resembles the current situation, except that the virus has a 95% fatality rate.  Lots of food for thought about how we would survive, physically and socially, once the grocery stores were looted and empty.  One of those books I was still thinking about months later.

Blindness, by Jose Saramago.  As the title implies, this is about a plague that causes 99% of the population to go blind.  Similar to Station Eleven, themes are about how we would survive physically and socially if we could not see.

Memories of the Space Age, by J.G. Ballard. The title of a short story and collection of similarly-themed short stories.  Lately, I find I only have enough concentration to read short stories.  This one is about how man’s intrusion into space causes a plague-like time-slowing effect that starts at NASA and advancing through Florida until the entire state has to be shut down and emptied of people to stop the spread.

The Word for World is Forest, by Ursula K. LeGuin.  Humans have depleted every natural resource on Earth and are now plundering other worlds.  On Forest, they meet their match in the natives, who eventually drive them off but not before their innocence is defiled. Not a plague, but post-apocalyptic and not so unbelievable considering our rampant destruction of our planet.

The Man in the High Castle, by Phillip K. Dick.  This novel has been made into a TV show starring one of my favorite actors, Rufus Sewell.  In this scenario, the plague is fascism.  Again, not that farfetched, I’m afraid.  The plot: Germany and Japan won WWII.  The Germans are exterminating every person in Africa and chasing down the few Jews who slipped through the cracks.

On the Beach, by Nevile Shute.  A nuclear holocaust has exterminated the human race except  in Australia.  They know it is just a matter of time before the radioactive clouds reach them and cause them to die in agony.  By far the scariest scenario because they know their plague is coming.  I couldn’t finish it.

And now, a beautiful view of Oxford’s spires from a hilltop on a spring day. 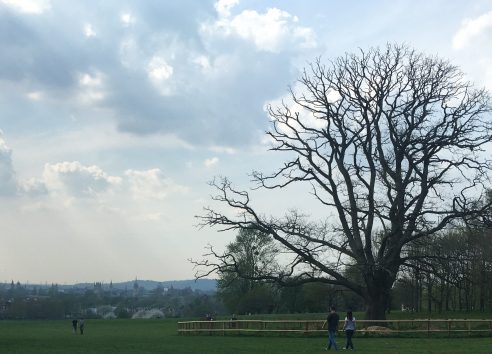