3am.  Lynn was snoring lightly.  I crammed in some earplugs and eventually got back to sleep, my mind awhirl with thoughts about my next move.

“Aww, I’m sorry!” I said as I rolled out of bed for a scheduled call with my family. I made a mental note to change my alarm from harp music to something easier to hear with earplugs.

The family was gathered for a birthday, and they passed Vince’s phone around.  I got to see an extreme close-up of my mom’s nose and then of her husband’s ear.  They don’t quite get how it works.  Some day that will be me.

A couple hours later Lynn and I were in a covered mall in Naramachi, the neighborhood near our hotel.  On our first day, we hadn’t found the “atmospheric” sections but after wandering farther we got why the guides promoted it.  Like most places except Disneyland, it is a patchwork of old and new.

Most everything was closed.  We tried to decipher the directory. 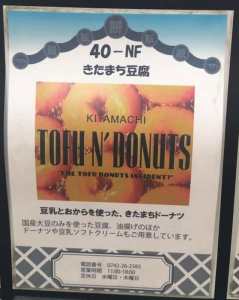 “Maybe it means the tofu donuts experience?” Lynn posited, “or maybe it’s a reference to the war of the tofu and donuts, much like they refer to World War II as the ‘unfortunate period.’”

“That’s pants!” I riffed, using the British slang word for something that’s all wrong.  “And what do pants have to do with having a golden day?”

“It doesn’t bear thinking about!” Lynn shuddered as she walked away.

The only place open was a grocery, so we had a gander and I bought seaweed and bonito and a giant sushi takeaway for breakfast.  We sat in an area with picnic tables while I ate.  “Sushi for breakfast would be a fish too far,” Lynn said.  “Give me kippers or nothing.”

There were three coffee shops on the periphery of the seating area, but none were open and no signs indicated opening hours.

After I ate my sushi like a starving shark, we walked until we found a restaurant that was open. 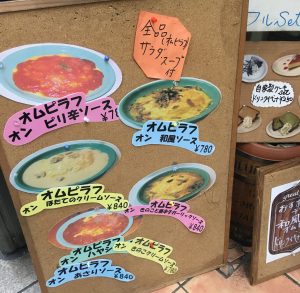 The place was run by a husband and wife team; he was the cook and server and she worked the register, which was festooned with tree branches decorated with tiny colorful ribbons and flags.  There was only one other customer; he was smoking and reading a newspaper.

The proprietor handed us menus, saying, “No English,” apologetically.  “No worries,” Lynn replied, giving him a big smile.

The pictures were the same as on the sign board outside.  “So do you want red, tan, or white food this morning?” I asked her.  The proprietor returned and Lynn pointed to sandwiches, then coffee.  I only wanted coffee, which caused confusion.  There was much holding up of fingers and nodding and smiling and pointing.  Five minutes later he brought two huge plates of sandwiches and two bitter coffees and a tiny pitcher of gooey sugary white stuff.

The sandwiches were like the ones we’d been served on our first day at the Nara Hotel—they seemed to manifest the Japanese idea of what westerners liked—soft, white bread with the thinnest slices of cucumber and ham slathered with mayonnaise, crusts removed and cut into triangles.

I transferred half of mine onto Lynn’s plate when she was done so they would think we both ate half our food.

Outside, the mall was now bustling.  I found a knife shop where I bought what I hoped would be a good knife for Vince.  We stopped and ogled a bun-making operation which used something like the machine below.

I almost took a photo, then thought, “They’re not in the business of providing photo opps; they’re out to sell buns!”  So I bought a half dozen green buns filled with bean paste and ate one, then ate them all.

“Where to start?” Lynn mused as we consulted the area map. “The calligraphy museum, the toy museum, the period houses, or the mosquito net museum?”

As I stood in the bathroom at 3am stamping my feet to try and get my Restless Legs to go away, I noticed the labels on Lynn’s toiletries. 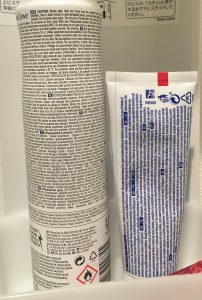 While I respect all countries’ national pride, does every EU country really have to have precautions about not using more than a pea-sized dab of toothpaste provided in their own language on the back of toothpaste tubes?  Is the swallowing of too much toothpaste a menace to global health?

This is probably one of the things that drives Brexiteers crazy.  Brexit—Britain’s exit from the European Union.

In the US, we have watched, enthralled and horrified, as the country of our mother tongue and many of our ancestors rips itself apart in a very undignified, un-British manner. I imagined some Leaver—as Brexit advocates are called—standing in his tiny damp English loo right now, glaring at his toothpaste tube and muttering, “Bloody bureaucrats in Brussels ….”

The day was hot and humid again.  Lynn and I walked to the shopping district for one of our favorite travel activities, shopping.  We usually have some item in mind we want to buy as a gift. Something that provides the excuse to go shopping. I was looking for a knife for Vince, and Lynn wanted sake for Richard.  But the purpose of shopping was really to experience what stores and products were like in another country. We hardly ever end up buying what we are purportedly looking for, and almost always buy something we didn’t know existed until we saw it on a shelf.

Here are some sights we saw along the way.  This sign, advertising “Rojetta by Snob.” 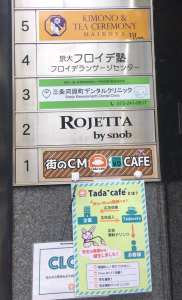 Me with the Japan Rail mascot, I think.  It must have been 100 degrees Fahrenheit inside that costume.

This lovely deco building was kitty corner from Takashimaya, our destination department store. 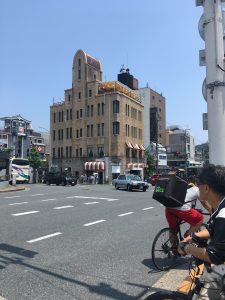 Takashimaya is like Harrods’ in London or KaDeWe in Berlin—floor after floor of luxury goods you cannot afford.  But Takashimaya also had quotidian items like slippers and housedresses. 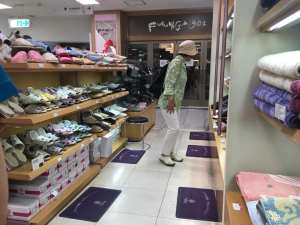 There were sections of tea pots and chop sticks.  I didn’t get too close with my camera because no one but me thought this was remarkable. 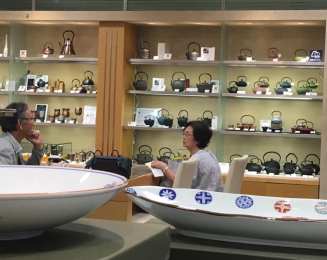 The sweets section was so vast I had a moment of panic thinking we wouldn’t be able to find our way out of it.

We spent most of our time in the packaged foods section.  Beans were big. 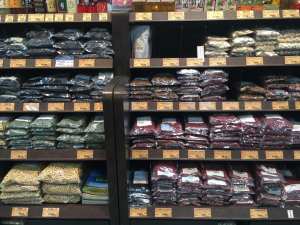 So were dried fish.  Please never buy Manta Ray fins.  The way they are harvested is barbaric.

I bought bonito flakes, red beans, and burdock root, which Taro had told us is referred to as “no doctor” root because of its medicinal properties.

Outside, there were flocks of young people—Japanese? Chinese? Korean?—dressed as geishas and snapping selfies.  It must be fun to come to Kyoto for the weekend and play dress up.

What, exactly, are geisha?  I went through a geisha phase a few years ago.  I read the 1997 bestseller “Memoirs of a Geisha,” by Arthur Golden, a white man born in Tennessee.  I read the 2002 memoir, “Geisha, A Life,” by Mineko Iwasaki, an actual geisha active in Kyoto in the 60s and 70s.  Golden’s novel was supposed to be based on her life; he interviewed her but apparently she was dissatisfied with his rendition and her book is meant to set the record straight.  Her book is heartbreaking and intriguing for what she implies but doesn’t say directly.

We were off to spend the afternoon at the Yasaka Jinga Shrine.  Or was it the Chion-in Temple?  Or the Shoren-in Temple? They’re all part of the same large complex.  We stopped to refresh ourselves at a café near the entry gate.

I’ll tell you this for free—burdock root may have medicinal properties but it is not a good substitute for French fries.  We sat gnawing on burdock fries washed down with non-alcoholic beers, then sauntered on.

Timing is everything.  If we had had regular fries we might have missed seeing this Shinto wedding.  The large hat covers the bride’s horns. Yes, horns.  You know us women, we’re devilish like that. 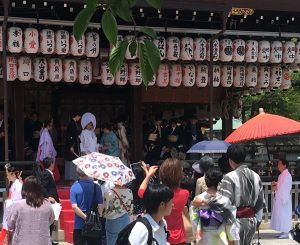