Two days ago.  I loaded my car with boxes and was pulling out of the parking lot of my condo to take them to the new apartment, where I would sign the lease, get the keys, and start moving.  Again.  The third move in 2.5 years.  I was feeling pretty pissy and had a bad case of the What Ifs: What if I couldn’t get the Internet set up in my new place?  I had to give a presentation about my Ethiopia trip on Tuesday.  What if my dining room table wouldn’t fit through the front door?  What if my new landlord turned out to be crazy, like the one two landlords before her?  What if, what if, what if.

The PT I was seeing for my vertigo had suggested I start meditating because stress can make vertigo worse.  Ha!  Who has time for that?  Maybe I would try to get back to meditation after the move.  At least my Restless Legs was under control, after being put on yet another Parkinson’s drug.  Now if I could just figure out how to get back to sleep when I woke up at 4am … blah, blah, blah.  Why wouldn’t my mind ever Shut Up?

My phone rang and I steered and shifted with one hand while winding down a steep hill and answering it with the other.  “Hi Mom,” I said irritably.  The number had come up as “Nina,” our family nickname for her.   She had a gift for calling at the worst times.

But it was her husband, Jim, and he sounded dreadful.  “Your mother is having another one of her episodes,” he said.  “I called Tom to take us to the hospital.”  Tom is one of his sons.

“But Tom is nearby so he’ll be here faster than an ambulance could.”

It was no use asking how he was so sure about that, or reminding him that paramedics are trained and equipped to deal with emergencies.  Tom is a nurse.  Bless him, he works in a hospice, but I don’t know that that’s the proper training to respond to emergencies.

My mother went to the ER three times last year due to stroke-like symptoms caused by low blood sodium.  But both of her parents died of strokes, she has high blood pressure, and she’s been under loads of stress lately because in two weeks they will move out of the house they’ve lived in for 30 years into senior housing.

“Give her a baby aspirin, just in case,” I urged Jim.  In the back of my mind I remembered something about aspirin and stroke.  I have now learned that, like most things, it’s more complicated.  Here’s an article from the National Institutes of Health that provides some guidance.  The baby aspirin probably didn’t harm my mom, but it probably didn’t do any good.

It was a stroke.  We waited almost 24 hours to find out for sure.  When the neurologist finally gave us the news it came as a blow.  I think we had convinced ourselves it was the other thing—the low sodium—and that if they just gave her an IV she would be back to normal in no time.

“She may or may not regain some functioning,” he said.  “I’m not trying to be harsh.  I am just telling you the facts.”

Did you know carrots grow on trees?

I hovered near the hospital room door while a speech therapist did an assessment.

“Su-san?” she said slowly, “Do carrots grow on trees?”

“Down south,” insisted my mom.  “They’re coming from down south and we need to meet them.”

None of us knew what this urgently repeated phrase “down south” was about.   She had said “Obama” repeatedly in the night.  When I joked, “We know you love Obama,” she snapped, “No I don’t!”  So she’s still a conservative.

Sorry if you thought “down south” referred to my lovely UK road trip.  Here’s my mom with my sister and I in front of the house in which we all grew up. 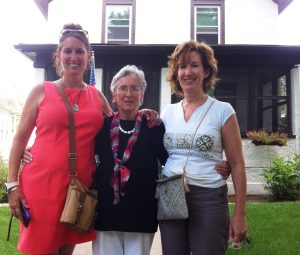