In some of Vince’s posts it sounds like I abandoned him.

But during the seven “fun” years, as he calls them, when he was “only drinking,” I did visit him every couple of months.  Remember, it’s a two-hour drive to Fountain / Lanesboro, so each visit meant a six- to eight-hour day or staying overnight. Mondays were his only days off, so a visit usually involved taking a day off work, too.

I hope I don’t sound defensive. It’s just interesting, and very common in families, that our emotional impression of events is so different.

At first, right after his relapse, visiting him was so emotion-laden that I might weep in the car most of the way home. The first time I saw him after six months of not knowing where he was, after his meth bender, I was shocked by his appearance. Gaunt, hollow eyes—they even appeared to have changed color from brown to almost black. His clothes looked as though he had just survived a ship wreck—torn and filthy. He was 27 but he looked 10 years older. Someone passing by asked him, “Hey Vince, who’s your date?” He didn’t like that.

I asked him if I could buy him a pair of jeans and he said, “Sure mom, but they have to be Lauren—Ralph Lauren.”

It was always the same routine. He didn’t use email or Facebook or talk on the phone; communications was solely by text. So I would text and ask if such-and-such a weekend would be good for me to come visit. Half the time he wouldn’t reply. Then I would text again a few days later, and a few days later, until finally I’d get a text back with him saying he’d dropped his phone in the river but he would love to see me.

When I arrived in town it was always awkward. He was usually working so I would have a burger and a beer. I always had the impression that he wished he could escape from me—to go use? I don’t know. He didn’t want money from me; he never asked for money and, after all, he was working full-time. When he lost his job I might take him shopping for clothes or buy him a contact lenses refill so he could see, but I never gave him money.

We would go agate hunting. He would show me the home-made raft he and Seth had built out of empty industrial-sized ketchup tubs and duct tape. We’d go to the Amish market and make fun of their eye glasses, which were all the same steel-rimmed, round, and always smeary. We camped on Seth’s land with their group of friends. Vince would toss a ball for his dog, Willie, or play catch with one of his friends. One time someone had won a meat raffle and Vince roasted it all over the campfire and I gorged myself. 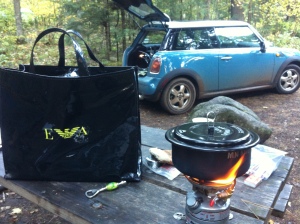 I would show up in my Mini with my Emporio Armani bags and my Murano glass beer bottle opener I’d bought in Venice.  These were almost like protective shields, as if they declared (again), “I’m not one of you hillbillies!”  (A friend in London works there and is my source for these sturdy plastic bags which are great for camping.  I am way too cheap to actually buy anything there.).

Seth talked nonstop, but Vince would say barely 20 words.  There was never any animosity, just an elusiveness. Who was he? What did he want in life? Was this it? Did he ever date? Did he wish he had kids? Would he ever go back and finish his degree? Did he ever think about buying a house? 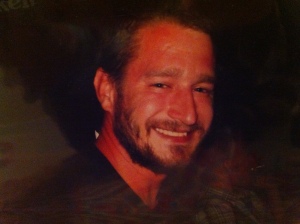 If I couldn’t contain myself and asked one of these questions, he would deflect it with a joke. When I left, he would hug me and say, “I love you mom.”

It got easier as time went by. And, I have to admit, once I gave up my vow to never drink in front of him, we all loosened up a bit.  Alcohol, such a time-honored stress reliever.

I came to feel proud of Vince.  He worked, paid his bills, paid taxes, had friends, had fun.  He seemed to have overcome the drug demons and was only drinking moderately.  Well, moderately for him.  For the umpteenth time, I was lulled into thinking it would stay this way forever.