I pride myself on writing realistically about life. You can count on me to tell the truth as I know it, to question everything, and to imagine the worst case scenario. I don’t know why the Pentagon hasn’t called me yet to offer me a disaster-planning job.

But that doesn’t mean I’m depressed, or even “unhappy”—the more generic term. Being a highly-analytical thinker has its rewards. I notice and think about things that other people do not. There’s often absurd fodder for laughs. Sometimes I’m the only one laughing, but that’s okay, right?

There was an article in the Sunday paper about a study that debunked the popular myth that “happy” people are healthier and live longer. Yes! My friend who works in an old folks home—or whatever they’ve been rebranded as now—has always said, “There are plenty of miserable, crabby 90 year olds. And they’ve always been that way, because their kids tell me they have.”

About five years ago, I kicked the depression that had dogged me all my life. Since then I have felt mostly contentment, punctuated with the normal situationally-appropriate emotions. I felt angry when my landlord raised my rent $300 a month, which forced me to move. I was stressed when I moved again three months later so Vince could live with me. I was anxious when Vince was in solitary confinement. I cried for everything my sister and her kids went through when she had cancer. I felt awe hiking in Petra, in the Jordanian desert, and nervous about crossing over into the Palestinian territories. I felt powerless rage when I was banned from visiting Vince. I had a blast with my friends in Berlin. I’ve been bored at work. I was proud when Vince led his squad at his graduation from boot camp. I am excited at the prospect of remodeling my kitchen.

Hey, I guess I just wrote my Christmas letter!  What a year it’s been.

None of it lasts. Some people figure this out somehow, much earlier in life than I did. Emotions come and go. The pleasant and the unpleasant, they’re all fleeting. So enjoy the nice ones while they last and know that the bad ones will dissipate. Don’t panic if you feel blue once in a while. Don’t latch on to the negative feelings or thoughts. If the blues don’t go away for weeks, of course, seek professional help.

In the last week I’ve had some really good times with people I love.

Yesterday I took my mother to tour the Purcell Cutts House, a prairie-style home build in 1913 and owned by the Minneapolis Institute of Arts. This is the living room:

The guide explained that the simple, serene style was in part a reaction to the chaos of the age. The architect was from Chicago, which was the industrial center of the U.S. Meat packing and other industries attracted droves of immigrants and African Americans from the south. There wasn’t enough housing, and the water and sewer systems weren’t up to par. There were no child labor laws, workers’ compensation, welfare, or social security.

So architects brought nature and art inside. Obviously this was not a house that could be produced on a mass scale. The immigrants and African Americans still lived in poorly-heated hovels. But at least this one architect could escape all that and find sanctuary at home!

Last weekend, I hosted a cookie-baking party for Vince and his cousins. 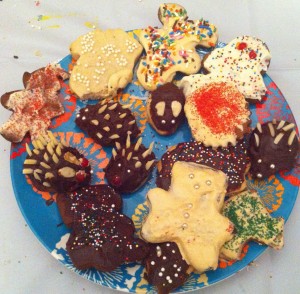 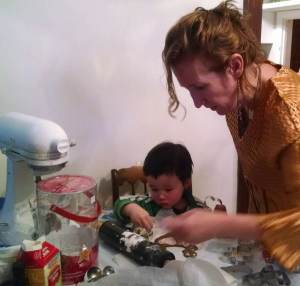 They’re not pretty, but we had fun. Strangely, Vince and I had prepared enough dough to yield 16 dozen cookies but only nine dozen made it to the final stage. Hmmm…or should I say, Mmmmm….cookie dough?

So enjoy the moments that contain things you love. In my case: design, craftsmanship, nature, history. Kids, creativity, and cookie dough.