This is the third in a series of posts about a road trip to South Dakota that starts here.

The trip was a good start in helping my organization figure out how it can reach many more torture survivors using technology. But first, you’re probably all wondering about the four-hour drive—was it scenic? Here is a photo of the view out my window: 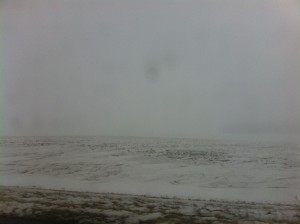 And another one; notice how I included a post in this one, just to spice it up: 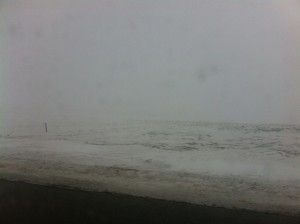 But wait! There was more to see as we got closer to Sioux Falls, like these billboards:

Yes, Sioux Falls has jobs. Their unemployment rate is the 4th lowest in the country—an eye-popping 2.3%, which is actually a problem.

It’s a nice small city, with about 165,000 people and growing. There appears to be more diversity than you would expect, with immigrants attracted to jobs in the Morrell meat packing plant and other industries. There’s no corporate income tax in South Dakota, so a lot of banks and credit cards companies are based there. And as in St. Paul and Minneapolis, where there are corporate headquarters, there is an orchestra, an airport, good restaurants and high-end shops, public art, and nice parks with bike paths.

There’s also no individual income tax in South Dakota, so if you’re looking for a job, you can find one in Sioux Falls and live like a monarch.

Our first visit was to Avera, which is a health system. It was founded by nuns which has become the largest provider of telemedicine in the U.S. What does that look like? I had no idea what to expect. But then we were led onto a sort of viewing deck from which we could see hives of doctors, nurses, pharmacists, and technicians tending to patients and lending back up to doctors in dozens of hospitals and clinics in 10 states. There was an e-ER, and e-Urgent Care, e-pharmacy, and so on.

There is a monitor, camera, and microphone installed at the foot of each patient’s bed in the hospital in, say…Thermopolis, Wyoming (an actual place). The doctor there can’t figure out what’s going on with a patient—in such a small place he just doesn’t see enough variety to recognize sepsis, or some other serious but not very common condition. The Avera e-docs can actually see and talk to the patient, diagnose him, recommend treatment, then monitor his vitals to make sure he’s responding—all from 677 miles away.

They also demonstrated an app that patients can use like urgent care, without having to leave the house. All their medical records are available to the clinician, who the patient can see and talk with via a secure Skype-like application that is compliant with all our complex medical privacy laws in the U.S.

Then, just for me, one of our hosts discussed their eCorrectional Health program. “Usually when a prisoner is seriously ill, they have to transfer him to a hospital, which can cost thousands of dollars. With eCorrectional Health, the facility physician can get a diagnosis and treatment recommendations without having to take the prisoner out of the prison. It saves a lot of resources.

“Everyone is happy…well, except for the prisoner, who doesn’t get a change of scenery.”

Knowing the medical, dental, optometry, and pharmacy “care” Vince received inside three different prisons, I think this eCorrectional thing may be a vast improvement. Prisoners may not get to leave prison, but they probably receive better care, from people whose humanity hasn’t been tainted and warped from working in the prison system.

We left Avera with our mouths hanging open, we were so impressed. The potential to expand the number of clients we reach is mind boggling. We’ve got a long way to go, but we’ll talk with Avera next week about potentially partnering to pilot something.