I’ve been writing about a road trip to South Dakota that I took for work last week. I can’t say a lot more about it. There were some eyebrow-raising moments which have to remain confidential.

But one of my intentions in blogging is to demonstrate how you can experience adventure close to home—and even in your head. You don’t have to spend thousands on a trip abroad. Your own neighborhood can hold surprises.

I’ve lived in St. Paul almost all my life. It’s not that big of a city—about 300,000 people. I went for a long walk on a Sunday afternoon and found the following things that were new to me.

I crossed the Smith Avenue Bridge, which everyone calls the High Bridge, because it’s, well, high. The High Bridge was new to me. What a view.  I know, my photos are not the best, but they’ll give you the general idea.

Sadly, because it’s high, the High Bridge is one of the preferred bridges in the Twin Cities for people to jump from. There was this tender note from a stranger to a stranger. 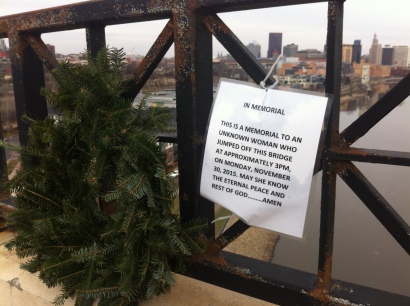 There was this makeshift shrine to someone named Teagan. I don’t know if she was the same person to whom the note in the previous photo was written, or a second jumper. 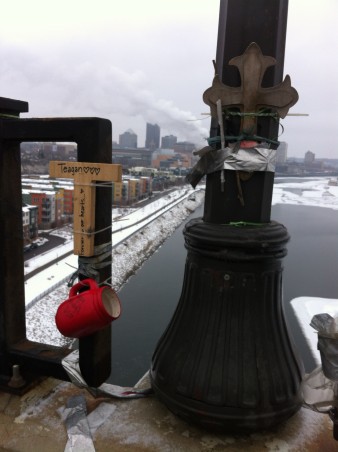 Someone has been thinking about how to prevent suicides from the High Bridge. I don’t know. Would you have the presence of mind to call the number, or would you even see it if you were intent on jumping off a bridge?

Ah, the sun came out, very welcome after being reminded of suicide at every footstep. This is a view from the Wabasha Bridge toward the train bridge.  I don’t know the name of the train bridge; everyone just calls it The Train Bridge. 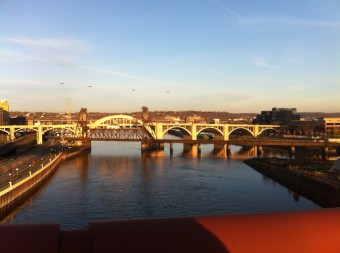 Now I was in Kellogg Mall, a long strip of greenery between downtown and the river.  I don’t normally read plaques. Because I travel so much, if I read every plaque (and spent time on every portrait of the Madonna and Child, for that matter), I would never do anything else.  But this one said something about Fr. Lucian Galtier, who gave St. Paul its name.

At the base of the rock there was a bag containing a hat, scarf, and mittens with a note that said, “I’m not lost! Please use to keep warm!” Presumably this is for some homeless person who has a preference for pink.

If it hadn’t been for Fr. Galtier, St. Paul might still be called Pig’s Eye. Pig’s Eye Parrant was a blind-in-one-eye French Canadian fur trader who squatted outside Fort Snelling, near present-day St. Paul.  He made hootch and sold it to the soldiers, then eventually built a shack on the river landing below what would become St. Paul, becoming our first civilian resident. The details are sketchy, but it makes a good myth and we have a pretty good beer named Pig’s Eye as a result.

So go for a walk!  Think how you would tell the story of what you see to a good friend, or to a stranger.  Get out of your rut. Take a different route than the one you’re used to. Take a left turn instead of a right. Follow that path into the woods you’ve always wondered about. Notice things. Snap some pics, or not.  Adventure is all around you if you hold the right attitude of inquisitiveness.