I’m house sitting again, this time for a friend who has a huge apartment and two cats who need minding.  My friend is Peruvian and collects art and artifacts every time she goes home.  Here are some of my favorites: 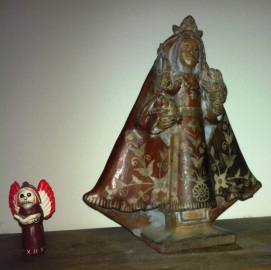 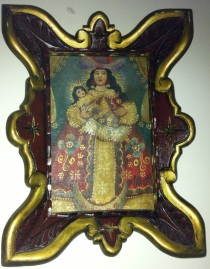 My last post about the road trip, and my anxieties around it, brought to mind the only other Big Road Trip of my life.  I’ve driven to Chicago a half dozen times but that’s nothing compared to the trip where I never once got behind the wheel.

My friend Rebecca and I met at an Alanon meeting in Oxford.  AA and Alanon meetings vary greatly from one culture and location to another.  In St. Paul meetings, people go around at the beginning, say their names, and the crowd responds, “Hi Anne!”  The meetings are pretty squirrely.  There’s lots of laughter and disorder.

Not so in Oxford.  The meeting was in an 18th Century church.  The ceilings were low and building was cold, cramped, and crooked.  The chairs were hardwood with no cushions and the backs were a 90 degree angle from the seat, making for maximum discomfort, especially since the tilted floors meant your chair teetered to one side.  I regret I never brought a marble to set in the middle of the table so I could see which direction it would roll off.

At my first meeting, the introductions started and the first person said slowly and with perfect enunciation, “Hello, my name is Roger”—or “rwah-jah” as he pronounced it.  I exclaimed, “Hi Roger!”  Just me.  No one else.  Everyone stared at their hands, neatly folded in their laps.  I’m sure they were thinking, “Bloody Americans, they’re so enthusiastic about everything!”

I heard a barely-stifled guffaw and a snort on the other end of the table just as a woman introduced herself, “Hello, my name is Rebecca.”  She looked straight at me and laughed.  The rest of the group carried on as if nothing out of the ordinary had happened.  It took a while, but Rebecca and I would become good friends.

A year later my work visa had expired and I was back in St. Paul.  I job hunted for seven months, taking the bus everywhere because I had sold my car when I moved to England.  It was a painful stretch.  As soon as I landed a job I bought a Mini Cooper.  Maybe it was a foolish thing to do, since I hadn’t even started the job yet, but I thought of my Mini as sort of like the greatest souvenir / consolation prize I could have from my time in England.

And did you know?  There are Mini events going on all the time all over the world.  I learned that there would be a “Mini Festival” in England the following spring.  It was as good an excuse as any to go back and visit.  So I Skyped with Rebecca and she was in.

“Let’s go to Wales though, too, okay?” she proposed.  “We can visit my brother the sheep farmer and camp on the cliffs overlooking the sea.”

Was that okay with me?  Was it!  Oh boy!  I bought my ticket and started looking at maps.

We would drive from Oxford to Wales, then slingshot back to Silverstone racetrack for the festival.  It doesn’t look that far on a map but … I’ll get to that.

If you’ve read this blog from the beginning, you know I started my adult life on welfare, in subsidized housing, with no car.

Here’s how I afford trips—my two indulgences—on a nonprofit salary: I live below my means.  I make do with small living spaces.  I have a dozen pairs of shoes—which is nothing for an American female.  I shop at thrift stores and get my haircuts at Cost Cutters with coupons.  I make my own coffee and cook from scratch instead of going to coffee shops and restaurants.

I hope I don’t sound smug.  My intention is to encourage you—if you love travel but don’t have a lot of money—to consider offbeat adventures like the volunteering, language immersion, and medical missions I’ve described in the last few months.  Or even just every day adventures like house sitting for a friend.