This is the second post in a series about a road trip across England and Wales that starts here.

It was May. It was still wintery in Minnesota but spring was well underway in England when I arrived. Rebecca lived in Woodstock, a small, charming town outside of Oxford most famous for Blenheim Palace, where Winston Churchill was born. The palace is okay, if you like that kind of thing.

My favorite aspect of Blenheim is the grounds and “pleasure gardens” which surround it. You can literally walk for hours and never see another human, just sheep. And the old trees…it just doesn’t get much better.

I could step out of Rebecca’s door, walk one block past the public entrance to Blenheim, then slip into the “neighbor’s gate.” I don’t understand how it all works, but apparently the Duke of Marlborough, who is the current occupant, must allow the public access to hike and enjoy the grounds. But you have to know there’s a no-fee gate, otherwise you’ll pay £14.90 just to walk in the gardens. Here are the two gates:

Woodstock is an expensive place to live. It has quaint shops full of locally-sourced organic gluten-free wool jumpers and cozy old pubs like The King’s Head, the Bear, and the Black Prince. People come from Oxford and London for the weekend to shop and eat and see Blenheim.

Rebecca’s address was The Maisonette, 1 Brown’s Lane. Maisonette just means “little house” in French. The building was just like the church where we had met—everything crooked, cramped, and damp—except it was about a hundred years older and had enjoyed that much less maintenance and upkeep. The ground floor was an antiques shop called The Dickens House, and the building/shop owners, believe it or not, lived below it in the windowless basement.

Rebecca and her flat mate had a three-bedroom, two-story flat above the shop—thus the term maisonette. It’s very common for flats in the UK to come furnished, with everything from (of course) furniture to appliances like toasters and kettles, down to the silverware and dishracks. The maisonette was furnished with the leftover antiques from the Dickens House, which were dark and heavy and took up so much space there was barely room to walk. The chairs and sofa were upholstered with worn puce velvet and the carpet was some sort of dark teal astro turf. The living room walls were adorned with William Hogarth prints depicting the 18th Century gin epidemic. 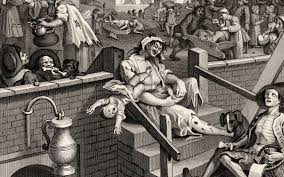 The Maisonette was located next to the public pay urinal and across from the one party pub that had some sort of heavy metal karaoke night, so Rebecca had her own personal gin epidemic on the weekends.

Her flat mate was never there because she worked two jobs in two other towns—as a DJ in Oxford and as some sort of communications officer for a nature preserve way out in the boondocks. I stayed in the spare room, in which was stuffed a queen sized bed, more antiques, and the flat mate’s boxes and bags of stuff which I had to crawl over to get to the bed, which was perfectly comfortable.

So I flew to London, took the bus to Oxford, and Rebecca picked me up in front of the Ashmolean Museum, which was our usual pickup place, and we headed to Woodstock to pack everything into Rebecca’s Nissan Micra.

Yeah I had a Mini, but she had a Micra, into which we—well she, really—meticulously packed my suitcase, her hiking backpack, the tent, sleeping bags, cook stove, food, a cooler, and other camping gear for our two-week camping road trip.