Back in Valetta, I still had a couple hours until sunset.  Unlike in Italy, no one had warned me, “Don’t go out after dark by yourself!” Malta is such a sleepy place; the biggest risk of wandering around at night would be tripping over a cobblestone, not being accosted by stick up men.

But first I washed my socks and underwear and draped them all over the room.  For fun, I looked at prices on the laundry bag.  Malta certainly wasn’t any cheaper than Rome—it would have cost me around $50 to have all my items done for me.

I also What’s App’d with Lynn, who I would meet in Madrid the next day.

“I shall have a very large bottle of wine waiting at the hotel,” she replied.

I asked the front desk guy if he would print my boarding pass and if someone could help me lug my bag up the steps the next day.  He was so nice.  You can tell when people genuinely like other people, vs. when they are putting on a smile because it’s their job.  He agreed to both of my requests.  I asked to see the cigars they had for sale in a small humidor.  Cubans!  Perfect.  I bought two, one for my cousin and one for me.

I also asked where I could get a good meal.

“At the British Hotel, right across the steps,” he replied without hesitation. “They are the best restaurant on Malta.”  Much as I enjoy a good fish and chips, I was looking for something more local, but I smiled and thanked him.

I headed out to see the main attraction in Valetta: St. Johns Co-Cathedral.  It cost €10, the most expensive thing I would pay to see on this trip.  I wondered why it cost so much.

I have seen a lot of churches and mosques and synagogues (as an aside, there are 365 churches in Malta, for a population of about 400,000 people).  Like the church in Marsaxlokk, the Co-Cathedral was outsized for the size of the city, and it was the most over-the-top gilded house of worship ever.  Here is my shaky faux Go-Pro video.  When I posted it on Facebook a friend commented, “Looks like Donald and Melania Trump’s penthouse.”

Here are a couple photos.  I don’t recall seeing twirled columns like this before: 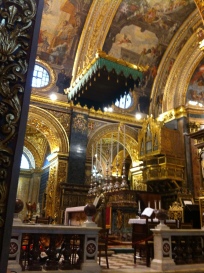 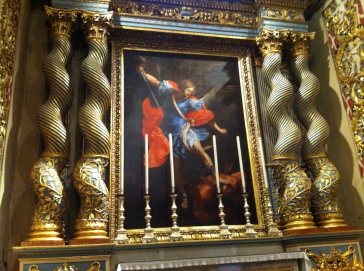 As usual I found myself wishing I had read up more ahead of time.  Why was it called a co-cathedral—“co” with what?  It was built by the Knights of Malta.  All I knew about them was that they provided security for the crusaders.  Obviously they had more money than they knew what to do with.  How did they acquire it?

Clearly the knights liked their skellies: 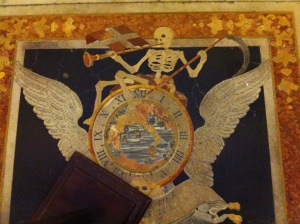 These two are from some other church but you get the idea.  Skulls and skeletons were everywhere. 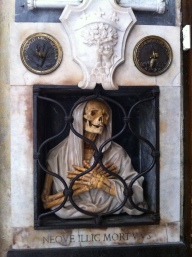 The football field-sized floor contained hundreds of burial crypts.  These were the big kahunas of their day, no doubt buried with great pomp in this gilded monument.  And now, their images and epitaphs were worn smooth by thousands of tourists’ feet, tourists who shuffled along gawping at the gold, not even noticing they were walking over tombs of great personages.  So much for eternal glory.

The co-cathedral’s main claim to fame is its two Caravaggios, the Beheading of St. John the Baptist and St. Jerome Writing.  These were in a separate room and it was strictly forbidden to take photos, so you’ll have to Google them yourself if you’re really interested.

Malta’s national dish is rabbit stew.  I passed restaurants with placards claiming to have the Best RABBIT Stew!  I’ve had stew of rabbits—shot by Lynn’s husband and stewed by her.  In the end I went to the British Hotel and had the best meal of my trip so far—marinated octopus and prawns in tomato sauce.  It was a white linen table cloth place with ocean views and impeccable service from the Maltese maître de and a Czech waitress—not the kind of place where to photograph your food.