I rarely sleep past 6am, but on my last day in Malta I slept until nearly 9:00.  While the previous day I had been awakened by a message from my cousin alerting me that the election wasn’t looking good for Hillary Clinton, this morning the first thing I saw, at the foot of my bed, was this:

Why would anyone think this was a good place to hang the complimentary bathrobe?

Spooked, I jumped out of bed.  I had to get moving anyway, since I had only a few hours before I had to catch my flight to Madrid.

People ask what my favorite thing is about traveling.  That’s easy—not being at work.  Now, I like my job, but it does require me to show up every morning, go to meetings, meet deadlines, and achieve goals.  Everything is measured, tracked, and scheduled. I must be organized, coordinate with others, prioritize, and strategize.

Aside from catching flights and trains, little of that applies to traveling.  I can float like a moth from one thing to another, when I like, depending on what catches my fancy.

Today, I wanted to revisit the little shops and the Maltese balconies I’d caught glimpses of on my first day.  So I wandered around Valetta for a couple hours and took photos. 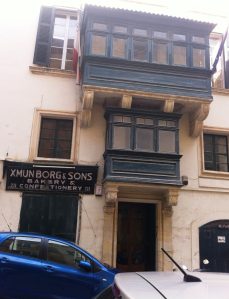 There seemed to be a lot of drapery makers.  My grandmother was a drapery cutter, believe it or not.  She was one of the grunts in an interior design shop which made custom drapes for rich people.  Thirty years ago, when I was living in public housing, she gave me a set of exquisite pale green silk drapes that her rich clients had rejected.

Some of the shops were open.  Some appeared not to have opened since 1929, although life on Malta didn’t really started until after 10am.

When was the last time you saw a “notions” shop? 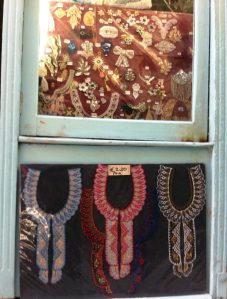 I know I will regret not buying a couple of those trim pieces the next time I want to make a dashiki.

There were these two forerunners of Target and Walmart:

Can you imagine taking your kids to the Family Store?  The looks of horror and disappointment on their faces?  I would give anything to visit these places in their heyday.  I wondered when that would have been.

I felt nostalgic for a time when craftspeople like my grandmother worked in neighborhood shops making high-quality goods.  I saved until I could buy them with cash.  I had a couple really good pieces in my closet that I wore over and over.  Now, I have 50 cheap tops; the buttons fall off almost before I get them home.

The top balconies below are Maltese.  What makes them Maltese?  I guess the fact that they have a roof and are enclosed. 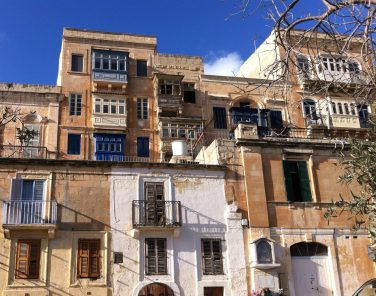 And yes, that is blue sky—at last, my weather luck had turned.

I threw my still-wet socks and underwear in my suitcase, and my friend the desk guy effortlessly carried it up the 200 steps for me.  “People write angry reviews of the hotel because of the steps,” he said mildly.  “But we have them on our website.”

I just looked, and I don’t see any photos or mention of the steps on the SU29 website.  However, if you’re going to Malta—or just about anywhere in Europe—you shouldn’t be surprised that there are lots of steps.

I was at the pickup spot for my prepaid airport shuttle 10 minutes early.  It never arrived, and I had to pay €25 to take a cab to the airport.  I sent Malta Transfer an email when I got home but they never responded.  So scratch them off your list if you go to Malta, but that was the only thing I could complain about besides the weather, which wasn’t Malta’s fault.

Here were some of the world news headlines in the airport: