Possum continued to have pain from her kidney stones, although blunted by pain killers.

“The doctor described what kidney stones are like,” she said.  “They’re not like stones at all, they’re more like bits of coral—jagged and razor sharp—so they tear your kidneys from the inside as they’re moving through them.”

I felt nauseated listening to her describe what was going on inside of her, but she was chipper.  “It was really interesting!” she declared.

“But was the doctor good looking?” I asked.  “Lynn said he was well dressed and had nice hair.  But Lynn’s married so maybe she’s not as observant as you or I would be—both of us being single.”

“Oh yeah, he was well dressed.  He had a nice tweed jacket with a green tie and yes, his hair was thick and wavy and silver.  But his face was just okay.”

“Was he wearing a wedding ring?” I queried.

“I think you may need to have a relapse so he has to come back and I can get a look at him,” I jested.  This was met with a stern look.

It was the morning of our second or third day in Cornwall.  Lynn was sleeping and I Possum and I were chatting while I washed my clothes.  Foreign washing machines always throw me for a loop.  Here’s the one in the cottage; note it has at least 25 options: 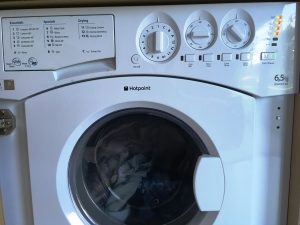 How hot is 40C?  I have no idea.  What did the symbols on the right mean?  No clue.  I had shoved everything in and chosen “Fast Wash,” which took two hours and 20 minutes.  After an hour and a half, the machine seemed to stop so I forced the door to unlock by shutting off the power.

This was a combo washer-dryer, and I had inadvertently added the dryer option.  “Drying” did not mean tumble drying.  It meant heat was pumped into the unmoving canister so that after an hour you extracted a compact, crispy-on-the-outside and damp-on-the-inside wad of clothes.  I have never known any European or English person to actually use the dryer option—they all hang their washing on racks.  I think they would say they do that because it’s better for the environment.

I went upstairs with the drying rack to hang my clothes dry.  The American washer and dryer (separate appliances) in my condo are so huge I can do two weeks’ worth of laundry at one go.  The washer takes 20 minutes and the dryer half an hour, tops.  I would love to see an energy use comparison between my giant, “Get ‘er done!” US appliances and European ones.

I peeled open the crispy-damp wad and found an unpleasant surprise.  All my clothes were blue.  I like the color blue, but blue socks, underwear, bras, shirts, and pants?  How did this happen, I grumbled to myself, as I hung up my blue tie-dyed dress.  It would take me a month to register it had been this dress.

Too soon, it was time for Possum to drive back to Oxford, despite Lynn’s and my protests.  She sent us texts along the route to assure us she hadn’t fallen asleep at the wheel from the pain meds, and had arrived home safely.

Meanwhile, Lynn and I headed out in the Picasso to Tintagel Castle.

This was supposedly the home of the legendary King Arthur.  We took a quick spin through the interpretive center, where we learned that there may have been a Roman settlement here but there’s no proof of that.  Some time after the fall of the Roman Empire, the King of Dumnonia, as the region was then called, built the first castle.  In the 13th Century, Richard, First Earl of Cornwall, took over and built the structure whose remains are still visible.  And so on.

We scraped our way down an extremely steep, dusty road, then climbed up about three hundred stairs.  It was the hottest day of summer so far, so we stopped for breathers and to appreciate the stunning scenery.  There wasn’t much left of the castle but the climb was worth the effort. 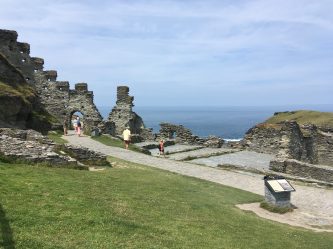 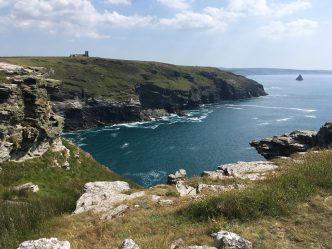 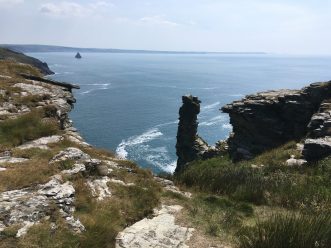 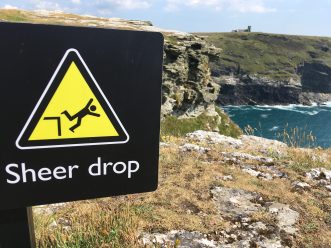