I pored over the maps of southwest England so I would have something to say when Lynn asked, “Where do you want to go today?”

Then there were the saint names: St. Mawgal, St. Erney, St. Neot, St. Mabyn, St. Veep.  I had grown up with Saints Matthew, Mark, Luke, and John; Mary, Catherine, and Anne. I wondered where the name Neot originated, and what Saint Neot had done—what torture he or she had endured to warrant sainthood (Wikipedia tells us he was a midget and the patron saint of fish).

Lynn would say she isn’t the world’s greatest driver.  And why would she be?  She grew up in London and has worked all over the world, so she has used public transportation or hired drivers a lot more often than driving herself.

The roads in the southwest are famously narrow and winding, with tall hedgerows on either side so you can’t see oncoming traffic until it’s right on top of you.  But that doesn’t stop people from driving massive campers and speeding along at over 50 miles per hour.

First, we had to get out of the resort.  Backing up is not Lynn’s favorite activity; she worried out loud about the  decorative rocks on either side of the “narrow” driveway. 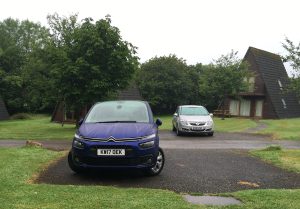 We heard a loud screeatch as one of the rocks tore open a piece of the Picasso’s siding.

Naturally I helped by taking a photo. 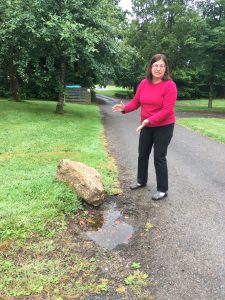 “Why do they put rocks everywhere!?” Lynn exclaimed.

“Well you’ve showed ‘em by moving one!” I said.

A grounds worker was passing by and Lynn called out to him, “Excuse me, excuse me!  Will you help us?  This rock was in the way and I seem to have moved it out of place with my car. Could you move it back?”

Luckily the guy was a giant.  Without a word he hoisted the rock and put it back in place.

“Thank you very much,” Lynn ingratiatingly.  “I suppose this happens all the time—these rocks everywhere, people must drag them out of place on a weekly basis!”

“No,” said the guy gruffly, and walked away.

I nudged the torn piece of the vehicle back into place so it wouldn’t flap as we drove.  “Maybe they won’t even notice it,” I suggested optimistically.

“It doesn’t matter,” said Lynn. “This is why I check ‘yes’ to all the insurance they offer, even though people say it’s a rip off.”

We managed to drive through the gauntlet of rocks and exit the resort.  The next step, which didn’t seem to get easier with repetition, was to guess which giant roundabout to take, and then which exit.  This involved driving around in circles, then making our best guess and plunging off an exit, hoping for the best.  The vehicle hadn’t come with a GPS so I was the co-pilot.  This was tricky because British signs mean nothing to me.  Here’s a sign for an upcoming roundabout:

As we drove, Lynn explained what A and B roads were, why some items in signs were in parentheses, what the little stub on the circle was, and more.  But often, the signs came up so fast we had only seconds to decide which way to turn.

The worst was when there was no sign, so we shot ahead, gradually coming to the conclusion that we were going the wrong way, and having to turn around.

Lynn got frustrated when we got lost.  I probably wasn’t helpful when I kept saying, “It’s an adventure!  We can’t really go wrong, everywhere we go, the scenery is so beautiful.”

Where the hedgerows opened up onto fields, the roads were lined with foxglove, and farther on we could often see the sea sparkling in the distance.

Here are some photos from Fowey, pronounced foyyyyyy.   I love British trees in general; they’re so much older than ours in Minnesota.  I was awed by these, in the car park, and it got better from there. 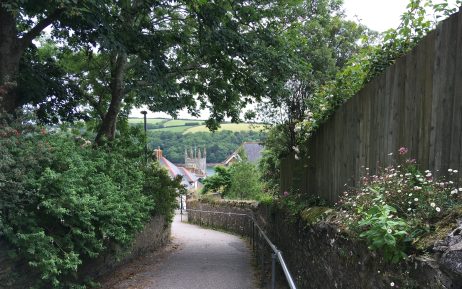 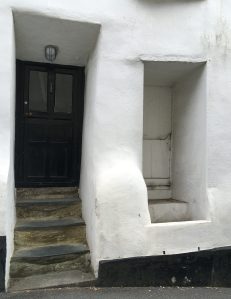