Eton, England is a small city of about 4,700 inhabitants in the county of Berkshire, England. Or as they call it, “Berks.”  As I’ve said, it’s home to Eton College, which adds another 1,200 boys to the population.

Eton is confusing to Americans.  It’s called a college but it’s what we would call a high school.  It’s an all-boys boarding school, which is an alien concept to 99% of us just as it probably is to the 99% of English people who can’t or won’t send their 13-year-old away.  It’s a public school, which we would call a private school.  It was founded in 1440 by King Henry VI, yet it is only the 18th oldest school in Britain.  The oldest seems to be Warwick, founded in 914.

I want to paint a picture of Eton for you without being creepy and violating Sam’s privacy.  These are some views of the High Street from my bedroom: 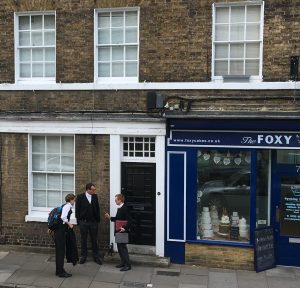 Sam’s place is like the three-story building on the left.  It’s above a tailor’s shop.  Lest you think I just gave away the location of the house because there is only one tailor shop in your city of half a million people, there are seven tailor shops in Eton and neighboring Windsor to care for the uniforms the students and masters (teachers image removed due to copyright issues) must wear:

It would have been nice to see more of these formally-dressed men and boys flocking through the streets, but the reason Sam was going to the States for the month was the summer holidays.  A few days after I arrived, they all disappeared and were replaced by Spanish and Chinese tour groups.

The house was three stories.  Entering from the street, you came into a hallway that led to the back garden and stairs to the first and second floors (or second and third, if you’re American). There wasn’t really a back garden, just a passageway, but Sam’s wife had installed planters with geraniums to echo the window boxes which I watered every day.

There were 15 winding steps to the first storey.  Or story, as we would write it in the US.  Here there were two bedrooms, one of which was mine.  Mine!  A beautiful, spacious guest room in Eton for a month!

Fifteen more steps led to the top floor, with the master bedroom, bathroom, livingroom, and kitchen.  This was my favorite space.

I worked at the big farm table which looked out over the ball fields and the Eton science building, and I had easy access to keeping myself stoked with coffee and tea.  I felt like I was on the Great British Baking Show, except I had to write grant proposals instead of make French macaroons.

Rob’s wife has lovely taste.  She had rightly insisted on moving their refrigerator from London.  There was also a DeLonghi toaster. 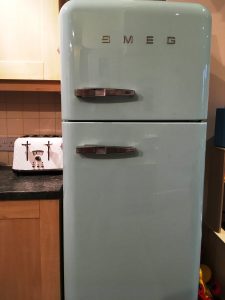 I love the name SMEG.  In fact I couldn’t stop saying it in my head, so I would turn on the John Lewis radio to Radio 4, which is like NPR in the US only with more very long stories involving people whispering in meadows as they crept up on bees and recorded their buzzing. 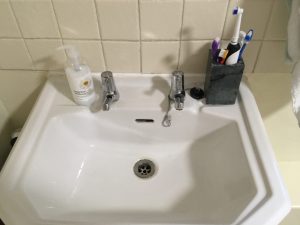 To wash your hands with warm water—not scalding hot or freezing cold—you have to put in the plug, mix water in the basin, then drain the sink and repeat this to rinse.

I would guess the house was Edwardian (1901-1910).  All the period features such as the fireplaces had been stripped out long ago.

Some of the windows were crooked—intentionally?

Nearby was the ubiquitous toilet brush which had to be employed on a regular basis because most British toilets … just don’t do the job the first time.

I’d encountered this shower set up before so I was prepared for it. A very high tub paired with a sheet of glass or Plexiglas that must weigh 100 pounds.  You instinctively want to grab it, but woe unto you if you do, because it swings back and forth.  Why?  I don’t know.  Then there is the shower plumbing, also a mystery.

To be fair, there are American things that make Brits wonder, such as cutting our food with the fork in our left hand, then switching to our right to actually eat.