Sam and his wife greeting me warmly. I had wanted to see them and their toddler before they left for the US.  I also knew that preparing for a month-long trip would be stressful and I didn’t want to get in the way.

The kitchen and living room had damp bedding draped everywhere to dry, suitcases yawning open, piles of papers for sorting, and were strewn with toys.  The baby was running around, jumping on the furniture, and crying disconsolately and without much enthusiasm, as young children do when they sense change in the works that they don’t understand.

In other words, a normal pre-trip domestic scene.

Sam had gone in to work, where an exam cheating scandal was unfolding among the Eton faculty.  “Just when there are a hundred errands to run,” Gwen said, waving her To Do list.  She is very organized, a high achiever, and methodical like me; I like her a lot.

“Did Sam tell you I’ll be teaching at Eton this fall too?  So I’ve got to prepare for that while we’re away.”

She’s had been a high school assistant principal, and it showed.

“Water the flower boxes every day,” she instructed me.  “I mean it, Anne!  Every day!”

I vowed I would. Sam appeared and said to me, “Let’s get you oriented to the town.”

“Sam, I need you to post these letters,” Gwen said.  “And then I have three more things for you to do when you get back.”

“Sure,” Sam said as we left the kitchen, then on the street, “Boy, she gets so stressed out when we travel.”

Windsor and Eton are two towns separated by the River Thames and connected by a pedestrian bridge. 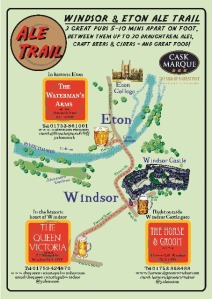 This map shows Eton north of Windsor, while the tourist centre map shows it east of Windsor.  Who knows?

Sam led me down Eton High Street and pointed out the oldest pub in town, The Henry VI.  “It’s not a very nice pub,” he said, “They’ve got Sky Sports on all the time.”

“But there are plenty of other good places,” and he pointed out burger joints, Italian restaurants, and curry houses as we walked.

We passed this passageway flanked by gargoyles.

Whoever thought this was a good place to install a security box ought to be fired.

“There’s the George, that’s probably the best pub.  They have their own local ales.”

We stopped on the bridge for a moment to enjoy the views. There was an abundance of swans. 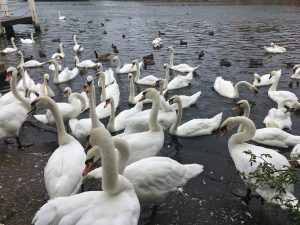 We passed through security barriers which could be employed on a moments’ notice to block off the streets in case of a threat.  This is a photo from the local paper which makes it look as though there are no people in Windsor, which couldn’t be further from the truth.

We walked up the street that winds up hill around Windsor Castle through hordes of tourists into Windsor proper.  “This is actually nothing,” Sam said.  “It’s not high season yet.  Just wait a few days, once we’re gone, it’ll be almost impossible to get through the mobs.”

“The Castle was built after the Norman Conquest,” Sam said.  He’s a walking encyclopedia.  It was kind of eerie, walking past trinket shops shilling Queen Elizabeth bobble head dolls and all-you-can-eat Chinese buffets, while on the other side of the street was a massive fortress built in the 11th Century by William the Conqueror.

Sam brought us to Windsor High Street.  “High streets” are synonymous with “downtowns” or shopping malls in the US.  They’re where all the action is and where you will find department stores and big groceries and banks, etc.

We stopped to have a couple pints.  When I remarked that all the tables around us were occupied by well-dressed women with babies or toddlers in expensive-looking prams, Sam said,  “Yeah, Windsor is a rich city and you’ll see lots of yummy mummies.  They don’t work; they spend all day getting massages, shopping, and lunching.”

Sam’s phone pinged as he took his first sip.  “Did you post the letters?” he read.  “I gotta go,” he said, and shot out the door.  I stayed behind to enjoy my beer, and his.