It’s a joy to look back at my photos and remember all the warm summer moments in Windsor and Eton, now that it’s bleak and cold outside.  We had the coldest Christmas day in 20 years yesterday—2F (-17C) and we are headed into a prolonged cold “snap,” as they call it.  The high in the next week will be 14F (-10C) and the low will be -14F (-26C).

When there’s a streak of warm weather, they call it a warm “spell” or a heat “wave,” both of which sound lazy and relaxed.  A cold snap feels like it sounds—crisp and harsh—and it rhymes with slap which is also how it feels.  In Minnesota, we exchange wane smiles with strangers in the grocery store the day before the cold snap slaps.

“Yah, time ta hunker down.  Buyin’ the food supplies.”  This is when you check out what they have in their cart, which is usually lots of frozen pizzas, bags of Doritos, and hunks of cheese.

“Liquor store is next.”

Minnesota has archaic laws governing liquor sales.  Unlike most places where people drink alcohol, liquor is sold in separate “liquor stores.”  You cannot buy it in a grocery or a corner shop, with the exception of low- or no-alcohol beer.  I actually like NA beer; sometimes I have a hankering for a beer at noon on a Saturday but I don’t want to fall asleep by 2pm, so I have an NA beer.  I still have to show my driver’s license in the grocery when I buy it.

Until this summer, you also couldn’t buy alcohol anywhere on a Sunday.  I guess this was because we were all so busy praying and going church.  Anyway, that ban was lifted and no appreciable rise in sinning has been recorded to my knowledge.

I worked, walked, and worked every day.  This was an ideal schedule for me.  My walks cleared my head and restored my spirits.  I would be pissed off about something I or someone else did or didn’t do, and a long walk in the country erased any negative thoughts or feelings.

This scene reminded me of a Dutch landscape by an old master, only with a vivid blue sky.

Someone had planted a strip of wild flowers. 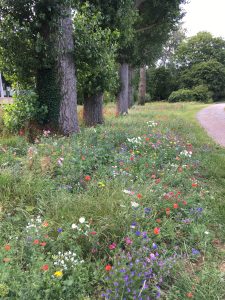 It was set between a line of trees and hedges and the road, so no one would see it unless they happened to walk along this remote stretch of path.  It went on and on … for maybe a half mile?  I wondered on Facebook why someone would have sown wild flowers in such a hidden area, and Lynn responded, “They were probably planted to attract bees.”  Of course!  They weren’t for people, they were for bees.  But what joy they gave to those of us who stumbled upon them.

Heidi came for a day and I walked her around the Thames meadows where I went swimming and showed her a place I had discovered called Luxmore Gardens. 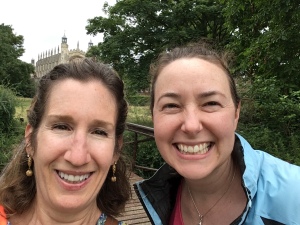 Of course I had not “discovered” it but it felt like I had, since there was no explanation for why it was there or who created or maintained it except a plaque dedicated to an “Eton Old Boy” as their alumni and former headmasters are called.

We went on a boat tour up and down the Thames and talked the whole time so I can’t say I learned anything new.  They handed out a brochure with all the information and I kept it for months, meaning to read it but I never did.

We ate at the Waterman’s Arms pub.

We talked about going to the continent but by now Heidi was running out of time so we sighed and promised we would do it another time.

“This is the second time we’ve discussed it,” I remarked between mouthfuls of lasagna.

“I know,” Heidi said between sips of the local raspberry cider.  “It’s going to have to stay on the old bucket list until I come back from Aus next time—if you’re around.”

“It’s good to have things on it, right?  How it would feel to have everything checked off?”