Mid July in Eton.  I was listening to a webinar about raising funds from European foundations.

Probably a quarter of my job consists of keeping up with what’s going on in my industry. I call it an industry because it is.  We like to think we’re all singing Kumbaya arm in arm while saving people, but without professionals who know what they’re doing, adequate funding, and an international infrastructure to support and coordinate everything, it’d be a big mess  Well, a bigger mess.

The international infrastructure is made up of what are called multilateral institutions, which are organizations that have funding from multiple countries: the World Bank, World Health Organization, and some of the United Nations bodies, like UNICEF.

The other day I was looking for a potential partner in Yemen.  I went to the UN’s Office for the Coordination of Humanitarian Affairs (OCHA) to see who is working there, in what sectors.  Sectors are activities like Water and Sanitation (WatSan or WASH for short) or Health or Protection. I browsed OCHA’s Humanitarian Response Plan interactive map to find other NGOs working in Yemen, in this case specifically in the Education sector.  For better or worse, there are only two in Yemen due to it being in a state of war—Save the Children and Norwegian Refugee Relief. I queried my colleagues to ask if anyone knew anyone at those organizations.  In this case we didn’t have relationships with either organization so my search ended there.

The mechanics are pretty straightforward if you know where to look, but the type of thinking involved is something that takes a while to acquire, and I really like that about my job.  I have three dozen other projects going on at once, large and small, that require the same strategic thinking, focus, communications, and persistence.

There are newish master’s degree programs in international development studies that package and deliver this information.  Most people my age, or with my number of years of experience, have learned it on the job from coworkers, at a conference, or from reading articles in an online community like Devex.

My organization, the Center for Victims of Torture, just got a grant from a Swiss foundation that I found on a European foundations website almost five years ago.  What were the odds— finding a foundation in Switzerland that is specifically interested in mental health and Uganda?  But after clicking through a hundred other foundations, there they were, and after years of Skype and in-person meeting, writing proposals that weren’t funded, and having them visit our program in Uganda, they will now be supporting us in significantly expanding our work there.  It took involvement from 10 people at CVT, and someone else wrote the proposal that got funded, so it was a group effort and we’re all feeling pretty good about it.  When I am sifting through hundreds of foundations that aren’t good fits, I keep this one in mind.

Back in Eton.  The webinar informed me that the 28 member countries of the EU have the same number of foundations and give the same total amount of funding as the US ($160 billion in 2015).  Did you know that IKEA is probably the world’s largest foundation? I didn’t.  The UK, Netherlands, Germany, Italy, Switzerland, and France have the highest number of foundations with the most money, but the French foundation websites are all in French, so it’s a good think I have French-speaking colleagues to check those out.  The webinar made some common sense suggestions, like looking to the former colonizing country for funding (Italy for Ethiopia, the UK for The Gambia, France for Vietnam, etc.) and to look at the donor lists of our “competitors” to see who funds them.

That afternoon, my walk was through Eton proper, where I photographed signs.  I was fascinated by how signs seemed to direct everyone to stay in their lane. I know how rambunctious boys can be, but was it really necessary for the grownups to have separate entrances?  Was a dame—as I imagined—a bosomy older woman with white hair in a bun who wore a flowered housedress and pinafore?  And was there really only one tradesman? 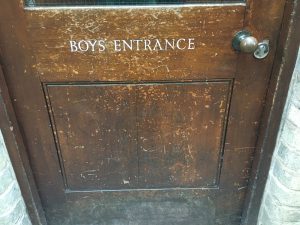