It had cooled down, with highs in the low 70s (low 20s Celsius). I checked the weather in Scotland daily and that gave me impetus to get outside as much as possible.

This was late July, for the town in Scotland I was destined for shortly.  Fifty-five Fahrenheit is 12 Celsius.

There were signs advertising something called a Brocas Fun Fair all over Eton. One afternoon after editing a proposal which described torture and the use of mass rape as a weapon of war, I thought, “Now is the time to visit a Fun Fair.”

I was still experiencing vertigo and my Restless Legs Syndrome was getting worse.  Poor sleep combined with vertigo added up to a continuous feeling of physical disorientation, which may have enhanced my Fun Fair experience.

It was a Thursday afternoon, so the place wasn’t doing much business and many of the stalls were closed.  A couple of 10 year olds who were probably skipping school climbed onto a ride and a carnie yelled at them to bugger off, instead of directing them to the ticket booth and inviting them to come back.

In case you thought Americans were the only ones obsessed with guns, there were three booths with shooting themes.

Another depicted what someone must have imagined was a “real American road scene,” complete with truckers and maybe a Harley rider, with skyscrapers and the Statue of Liberty thrown in for good measure.  Then there’s the toy-like boat in the foreground … I’m sure this would all feel magical to a five year old.

I was surprised the political-correctness police hadn’t demanded that this be redesigned—whatever it was. 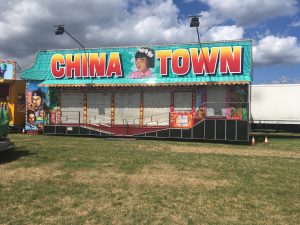 Wandering back slowly through Eton—the college—I got a laugh from more finger-wagging signs.

I could just hear the Pink Floyd song The Wall playing in my head.

I read this one three times, then gave up understanding it and walked on.

I spent a day shopping with Julie in Windsor.  She especially enjoyed the grocery stores.  We went to an upscale one, Waitrose, and a tiny local one called Budgeons.  At first glance, a grocery store in the UK looks the same as one in the US.  But if you look closely; if you pay attention to every item individually as though it is a meditative exercise, you will see many things that make you go hmm ….

Or in my case, shudder at the words, “With Jelly.”

For all I know, my local grocery may sell tubs of pork drippings with jelly.  However when I shop at home it is like a military strike—hurry in, grab the same items I buy every time, get out as fast as possible.

We had lunch at the Waterman’s Arms.  Fish and chips for Julie, lamb and mash and a half pint of cloudy local cider for me. 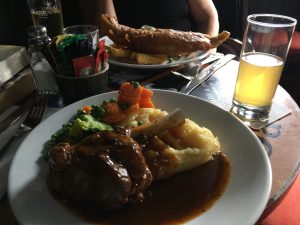 We visited a card shop near the flat. 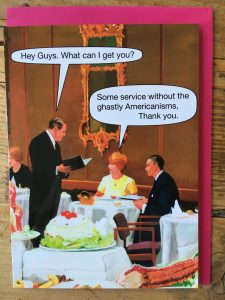 Part of my new-employee orientation at Oxfam had been to read the communications style manual, which included a directive to “avoid creeping Americanisms.”  By contrast, we have many, many “creeping Britishisms” in America and we love and embrace them.  I could write a whole post about this.

There was a series of cards that mimic illustrations from beloved children’s books combined with adult themes:

Other cards in the series include “The Acid Trip,” “The 12 Step Programme,” “The Halfway House,” and “Bouncing Back.”

I took Julie to Daniel, the department store.  Here she is in the toy section. 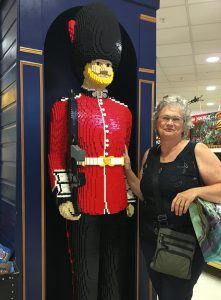 I went in to London one last time, dropping in to the Victoria and Albert Museum only long enough to buy my son a tote bag and other Pink Floyd-branded items.  The line for the exhibit itself was a mile long.

I searched Hamley’s, the gigantic toy store on  Oxford Street, for Sylvanian families badger figures for my nephews.  I was distressed that, like Daniel, they were out of badgers so I had to settle for a pizza-delivering hedgehog and a mouse dentist. 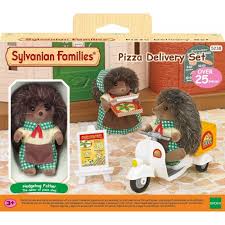