Before I leave England for Scotland, I want to share a few favorite signs and sights that made me wonder.

Like this one, on the back of the toilet stall door at the Waterman’s Arms.  The Clansman function room?  I know it’s clansman with a “c” and I realize it’s probably something to do with a Scottish clan, but still.  In the US there would be protests over this sign.  I guess the word clan just doesn’t have the same association with the KKK as it would in the states. 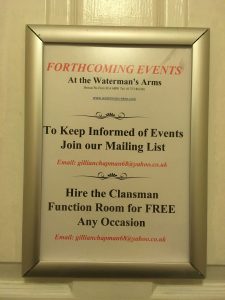 Speaking of bathroom signs, I always got a kick out of this one at the leisure centre.  Probably some fool had ignored the first sign, which just had words, and they needed to literally paint a picture.

Walking home from the leisure centre, I would pass this sign.  It was tempting to hang a right to find out if there would be liquor barrels bigger than a man.  But the path led to a deserted-looking industrial area and I was always in a hurry, so I will never know.

At home, I kept glancing at the cover of the teacher’s union magazine that arrived in the mail.  The cover story was an important one.  Teachers need to be aware of the effects on children of being involved or even just hearing about traumatic events like the inferno at Grenfell Tower or the mass shooting in Manchester at the Ariana Grande concert. 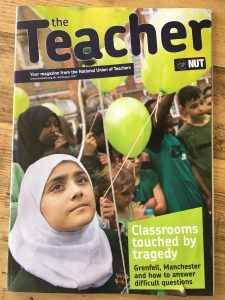 But I also smirked at the acronym for the organization, and its placement, with rendered the title “The Teacher NUT.”  It seems a bit inappropriate, but it is memorable.  In the US, we have several bland acronyms: NEA—National Education Association and AFT, American Federal of Teachers.  I think I would prefer to be a member of the NUT.

Out on my walks, I would often pass this van. 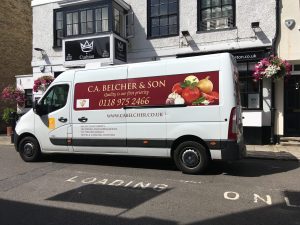 At the playground in Windsor.  What an optimistic sign. 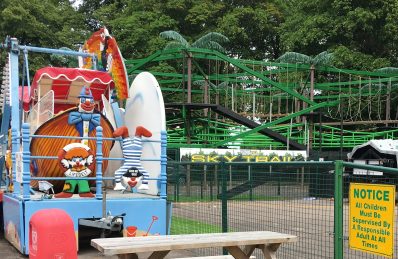 In the Eton Museum of Natural History. 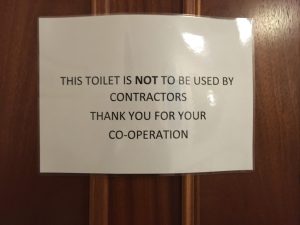 Do a lot of contractors wander in off the street to use the toilet at the Natural History Museum?  Are contractors considered an inferior type of person, not worthy to piss in the same toilet as others?  Did some contractor create a situation in here, and no one is brave enough to confront him in person so they put up this sign?  I was careful not to make a mess in case there might be a sign “This Toilet is NOT to be Used by Americans” upon my return.

I passed this ominous poster in Windsor, stood a while taking photos of it, then realized I was right outside a military installation and moved along.  I’m sure it doesn’t appear ominous to the target audience—young men with lots of testosterone.

It’s a recruiting poster for the Coldstream Guards, the oldest regiment in the British army.  There is probably a recruiting office here because these are the “guards” as in “the changing of the guards” at Windsor Castle, which is just a few blocks away.  In this role, they wear what’s in your mind right now—the tall black furry helmets and red uniforms with brass buttons. 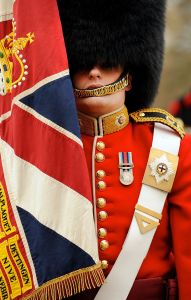 And this, in London, didn’t make me wonder. It made me feel admiration for a country which had only decriminalized “homosexual acts” in 1967.  Fifty years.  That’s not so long.  Maybe in 50 years’ time we in the US will have decriminalized immigrants. 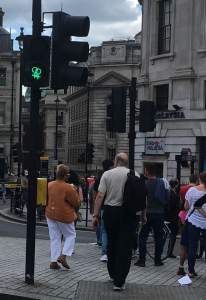 Julie and I treated ourselves to a couple nights in a room above The George. The only room left was the top floor suite. Julie chose the master bedroom with a spectacular view of the Thames bridge and Windsor Castle.

Unfortunately this room turned out to be the one beneath which smokers congregated and drunks hung out at closing time.  I was in a nook off to the side and with ear plugs I didn’t hear a thing.  I slept fine in my narrow bed except that the floor in the 270-year-old pub was so slanted that every time I rolled over I kept rolling, into the wall.

This was our last supper, roast beef and Yorkshire pudding in the back garden.