“They were up til 4am bouncing on the bed,” she replied, her face drooping with exhaustion.  “They’ve got jet lag, but they seem to get wound up, while I’m the opposite.  Charlie was nervous about starting school, too.”

Charlie, my nine-year-old nephew, had started a three-week stint at a local school that day.  His five-year-old brother was going to attend a week of kindergarten.

I expressed sympathy and felt grateful I was staying in a hotel.

“Have a pastry,” I implored her.  “Maybe the sugar will help.”

After much pointing, smiling, and bowing, the pastry-shop ladies had picked out four beautiful items and wrapped them as though I were visiting the Emperor.

“Most popular,” one lady kept repeating as she pointed to a rubbery-looking green blob.

“I have no idea what any of them are,” I told Keiko and Fred.  They read the enclosed descriptions and suggested I try the green blob.  It was rubbery, and filled with red bean paste.  “I love it,” I pronounced, truthfully.  “It’s not too sweet.”

After an hour or so of socializing at the art show, I was off to see the famous Takeshita Street and adjacent Meiji Shrine.

But first, I spotted a pair of 2020 Tokyo Olympics-branded trainers in a shop window and screeched to a halt.  I did need some closed-toed shoes, right, so I wouldn’t spend my entire month in Japan slipping around in the rain?  I sidled into the store, checked the price, did the currency conversion in my head, and dropped the tag like it was coated in acid.  A hundred bucks!

I know, I know.  Most people spend much more than that on shoes.  But I don’t.

I left the store and kept walking.  At the corner, instead of going straight toward the station, I turned right and walked around the block, thinking.  The shoes were Asics, a good brand.  I would wear them for at least three years, probably. So they really would only cost $33 a year, or $2.75 a month!

But I’m not working full-time anymore…I could find a pair of similar trainers at TJ Maxx for $28…but not with the Tokyo Olympics logo on them….not that I care about brands or logos, but I do love the Olympics.

Back in the store, I pointed the shoes out to a saleswoman, and she brought me a pair of socks and slippers.  This was going to be interesting.  Through a series of hand gestures, she guided me to remove my flip flops and put on the socks—without touching the floor—then slide my feet into the slippers.  Then, after she laced up the largest pair of shoes they had in stock, I carefully retracted one foot at a time and—without touching the floor!—slid them into the shoes.

I wondered, what her reaction would be if I accidentally skimmed the floor with my foot?  Would it shock her?  Make her gag? Would she make me go in back and wash my feet with soap and water?  It seemed crucial enough that I was very careful and didn’t blow it.

I bought the shoes, and I’ve worn them almost every day since.

Takeshita Street.  It took me some time to get there because, unbeknownst to me, the station has two names: Harujuku (the popular name) and Meiji Jinju (the official name).

When you think of quirky young Japanese people, Takeshita Street is the place.  There, they cosplay, which—I think—means they dress in character from anime/manga stories. Here’s the impassioned answer I found when I Googled, “What is the difference between anime and manga?”

Anime is animation of a cartoonish show and manga is book of pictures or comics (also graphic novels). They are not the same!

Since I couldn’t care less about either, Takeshita Street was a meh for me.

I did buy $50 worth of weird socks to give away as souvenirs.

There was a cat café.  The idea of eating in a room full of cats and possibly litter boxes did not appeal. 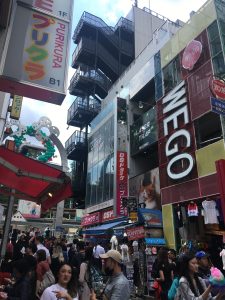 I am not Takeshita Street’s demographic, but I gave it a go, walking up and down and then out.