I had worried about how long it would take to get to Kasairinkai Park on the train, but arrived an hour early.  As the train became crowded with day trippers, I could no longer see the station names outside the windows.  Good thing I had counted how many stops I needed to go and got off at the right one.

I scored some krill-flavored nuts at the station convenience store, caught their wireless signal, and sat munching on a bench outside while I Skyped with Keiko, who was en route with the family.

People walked, biked, and scooted by.  It was a hot, sunny day but no one was wearing shorts, sweat pants, tank tops, or flip flops as one would normally see at any western beach.  I saw no cleavage in the month I was in Japan—except on one young western tourist who made up for the whole month.  There were no tattoos.  Tattoos are something only gang members sport.  Anyone with a tattoo must cover it up in order to use a public hot springs bath.

Most people wore sun hats and long-sleeved cotton shirts.  Many women wore black fingerless gloves and carried umbrellas.  Later, Keiko explained that Japanese women are very, very concerned with getting age spots and other sun-damage. This seems sensible, and I’ve even read that Japanese skin does not age as well as other skin types, but I don’t know if that’s true.  You sure see a lot of products, like snail gel, marketed as the “Japanese secret to younger-looking skin.”

Anyway, I was wearing a tank top with a crocheted top over it.  My head and shoulders were bare. Most of my arms and hands were exposed to the sun.  I had on flip flops. I wondered if passers-by were giving me the side eye and thinking I was scantily dressed, but it was too late now.  I’m a sun lover, but of course I was slathered with sun screen to protect my visage and décolletage.

I had brought the gifts I bought in St. Paul, Minnesota-made soap for Keiko’s mom, Hiromi, good chocolate for Fred, and a Minnesota Twins vs. Tyrannosaurus Rex t-shirt for the boys’ cousin, Ichiro.

I couldn’t wait to unload them.  They only added about three pounds of weight to my bag but the longer you travel, the more three feels like ten.

I handed Ichiro’s gift to him while we were at the top of the giant ferris wheel.  He looked flustered, nodded a vague acknowledgement, and held it on his lap.  Had I committed a giant faux pas?

“Go ahead and unwrap it,” I encouraged.  My nephew, Charlie, made a grab for it.  “I’ll do it!” he exclaimed. Charlie would rip the thing open in two seconds.

The boutique had wrapped it creatively, included tying pipe cleaners in intricate knots to close it all up.

Ichiro couldn’t make headway with the knots, so I nodded to Charlie.  He tore it open and held up the t-shirt to Ichiro, who said quietly, “Thank you.”  Did he hate it?  Had I embarrassed him?  I think he was just shy, especially around a western lady with holes in her shirt.

Next we had a snack.  Here I am eating octopus balls.  No, not their testicles—deep fried bits of octopus.  If I look a deranged, it’s because my nephews were next to me and we were hamming it up, but I’ve edited them out. 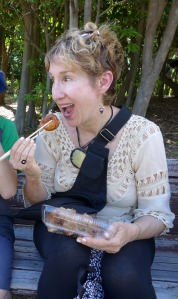 We strolled to the beach and the boys threw rocks in the water while we adults talked.  Needless to say there were no women in bikinis, and hardly anyone wearing a swim suit.  I had mine on under my clothes but wouldn’t have dreamed of stripping down.

“Let’s have an early dinner at the hotel here,” Fred suggested.  “They have very good Chinese food.”  The dumplings were very good; I also had tempura and cold soba.

I gave Fred and Hiromi their gifts and they seemed to like them.  It had been a nice day, capped off by an auspicious siting of Fuji in the sunset, to the bottom left of the ferris wheel.