Back at the New Tohoku after the day at the seaside, my Restless Legs woke me every 45 minutes.  I finally gave up at 1am and cracked open my book.  Then my brain did a side eye to my phone, sitting on the bedside table.

I try not to look at my phone after 9pm.  “They” say the blue light stimulates your brain and keeps you awake.  But I had posted some photos on Facebook … had anyone Liked them?  I tried to resist, then grabbed the thing and saw who had Liked and commented on my photos, tried to read my book again, went back to Facebook after 10 minutes like an alcoholic who says, “Just one more,” repeat.

Social media is like those pellet dispensers in B.F. Skinner’s psychological experiments.  You know, the one’s where the rat gets a food pellet every time it performs whatever task the researcher is trying to teach it.

I wasn’t being taught a new trick (that I am aware of).  I was succumbing to intermittent reinforcement.  This is where a reward is dispensed intermittently, and it’s the most addictive kind.  On social media, you never know when you’re going to get rewards, or in what form.  When there’s a flood of them, you get a rush, so you try and try to get a repeat.  Ugh.

I gave up on sleep at 4:30am and did some rejiggering of my itinerary.  As I’ve mentioned, I was going to have my nine-year-old nephew, Charlie, for five nights at the end of the trip, and after much research with Keiko we had settled on Hakone as the ideal destination.  Hakone is a resort area about an hour from Tokyo.  It’s got cable cars, a lake with boat tours, and lots of kid stuff to keep an active child busy.

But Keiko had received an alert from the Japan Meteorological Agency about volcanic activity near Hakone.  According to NHK, Japan’s equivalent of the BBC, Hakone’s cable cars were closed, there was danger of landslides, and some local restaurants couldn’t get black eggs—a local delicacy—because certain roads were shut.

We would have to cancel Hakone and find another destination.  We lobbed ideas back and forth on Skype, then she and her dad suggested the Izu Peninsula.  When I saw there was a city at the very southern point called Shimoda, I figured it was a sign, since as I wrote in a previous post I have an ancestor from Shimota in the former Czechoslovakia.  I have built travel plans around flimsier hooks.

I started getting What’s App messages from Lynn, who had landed at Narita.  It took her an hour and 45 minutes to get from her gate to the Skyliner, the airport train which took another hour and 15 minutes to arrive at Ueno.  I could see why Keiko had insisted on flying into Haneda, which is so much closer in to central Tokyo.

I would not make Lynn try to find the hotel on her own.  I walked to the station, then serendipitously decided to wander a bit and discovered there was a separate station with the same name across the street, just for the Skyliner.

To kill time I took photos of panda buns and a posse of school kids. 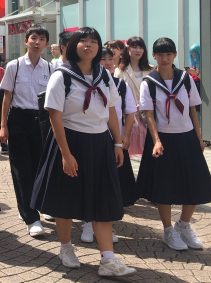 There were many groups of cute little kids, but I would never take photos of small children.  I figure high schoolers are fair game because they’re posting selfies all the time anyway.

I spotted Lynn and we were off.  I insisted on carrying her suitcase up the 30 stairs.  She fought me but I won, this time.  Lynn always travels with a very small bag—just one step up from a carry on.  But it’s like a black hole—tiny but extremely heavy.

“What the hell have you got in here?” I asked as I huffed up the stairs.

“A very large bottle of whiskey for Vince,” she replied.

Vince, my son who is in recovery.  This is not what it seems.  Lynn’s husband Richard had sourced a very good bottle of whiskey with which Vince would pay the officiant at his wedding in two months’ time.

Speaking of which, here’s another photo: