Charlie was not abducted.  He had just gotten bored and decided to wander off while I was looking for an ATM.  It was a coincidence that he’d been walking behind a stranger.  I had wondered if I was being too strict with him—not.

As we waited for the bus to the aquarium, we checked out cars.  Here are some gratuitous photos of adorable compact vehicles I took throughout Japan. 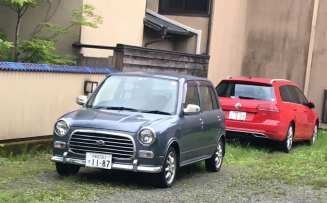 “Why can’t we have cool small cars like this?”  I asked Charlie rhetorically.

This was my favorite name, The Hustler.  This was not in Shimoda, and I was glad because I didn’t want to explain what a hustler was.

This is as good a place as any to insert a photo from the Edo Museum.  This car—I didn’t record its name—was the Volkswagen Beetle of Japan—the one cranked out by the millions that everyone owned in the post-war decades. 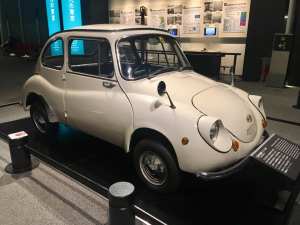 The moment we got off the bus, that smell hit us in the face.  If you’ve ever shopped in an Asian market that sells live fish, you’ll know what I’m talking about.  I love eating fish, but the smell, not so much.

I had researched the aquarium ahead of time and was amused that they had a “Dwarf” admission level, meaning child.

“No offense to you, or to dwarves, but you’re a dwarf today,” I informed Charlie as I paid our combined $29 admission fee.

It was hot and humid and we were tired.  Our first glimpses of the aquarium were not inspiring.  Much of its infrastructure was dilapidated and rusty.  But we would make the best of it.

As in most such places, there were shows that took place around the grounds on a regular schedule.

“C’mon, run!” I yelled at Charlie when I saw the dolphin show would start in five minutes.

He hung his head and dragged his feet.  “I’m hot and tired!” he whined.

“Run anyway!” I shouted over my shoulder, feeling like a bad aunt for the umpteenth time for yelling at him.

I don’t know what the dolphins would say if they could speak, but the show was amazing.

The trainers bribed the dolphins to dive or leap to get fish; the highlight was when one of the trainers stood on a dolphin’s back and rode it like a surf board. 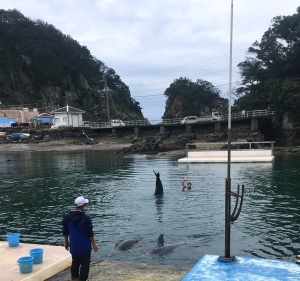 Afterwards, we checked out the non-air conditioned but shaded snack bar.  I had fried mackerel and Charlie ordered syrup-smothered soy balls and a sugary drink.  “That should perk you up,” I said hopefully.

As we ate, a manic penguin trainer blabbered away outside. “What is she saying>?” I asked Charlie.

“Probably wants to get it over with so she can get out of the heat,” I reckoned.

If he had had his way, Charlie would have sat in the snack bar all day.  Instead, I led him on a forced march around the rest of the aquarium.

He got to pet a seal and a giant tortoise.  Again, if these poor animals could speak I’m sure it would be to say, “Help, get me out of here!” 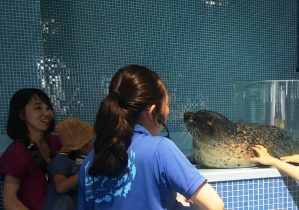 There was a magical display of jellyfish and oddities.  That’s Charlie’s head in the way.

As I watched rays swimming in a tank I thought, this isn’t as bad as having their fins cut off and served as delicacies in a restaurant, I guess.

The plaintive bark of a seal had been sounding nonstop since our arrival.  “We have to go see it,” I said, “even though I know it’s gonna make me really sad.”

And there it was, swimming back and forth in a pool no more than three times its body length.

“Oh I can’t stand to look at it!” Charlie said mournfully.  “Why do people do that?  I want to set it free!”

“People like us pay to come here,” I said ruefully.  Charlie was learning some lessons, although not the ones intended by the aquarium.

I forked out $10 to rent a paddle boat.  Charlie was thrilled to be in control, and when dolphins frolicked alongside us we felt a bit better because they seemed to want to be with humans.