The days roll by.  How can time go so fast when I don’t feel like I’m doing anything very exciting?

There is a phenomenon of time moving faster as you get older.  I turned 60 last week.  It doesn’t get much older than that!  Well, let’s hope it does.

A friend and I had dinner at the Randolph Hotel, a posh place that was reasonably priced.  I had gnocchi and it was okay.  But the room was splendid and the company was good, and they brought us complementary prosecco and birthday cake festooned with red currants, so it was very nice. 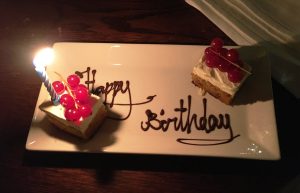 After dinner we walked next door to the Oxford Playhouse and saw the play Educating Rita. It’s also an old movie with Michael Caine and Julie Walters.  This version starred Stepehn Thompkinson, who starred in Ballykissangel and lots of other TV shows.

Educating Rita is about a young woman from a working class background who is thirsty to learn.  Tompkinson plays her crusty alcoholic tutor.  It was an appropriate theme for Oxford, I think, since the vast majority of the students here are from upper class families and everyone else is literally and figuratively shut out of the 38 colleges.  By that I mean that the campuses are all surrounded by high walls and the gates are guarded by porters who won’t let you in unless you’ve got some official connection.  Some colleges do promote tours of their campuses.

Then there are the free concerts, which I attend about twice a week.  I can walk up to the porter’s lodge, say “I’m here for the concert,” and they wave me through.  I enjoy walking past the hordes of proles craning their necks to get a look inside.

I’ve attended concerts at Christchurch Cathedral most often.  In one of the naves (I think that’s what it’s called, is the Lady Chapel.  It’s named for the patron saint of Oxford, Frideswide.  She was a nun born around the year 650 somewhere along the banks of the  Thames.  Her miracle—every saint needs to perform miracles—was restoring sight to the blind.

Poor Frideswide caught the eye of a king who wouldn’t take no for an answer.  You know, the age-old “Me Too” story.  There are multiple versions, but he abducted here, she got away, she hid in a forest, he ended up going blind and falling off his horse and breaking his neck. That may not have been the exact order of things, but you get the picture. 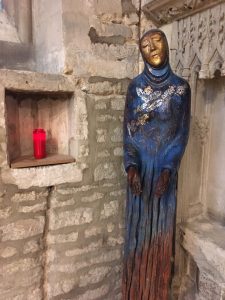 Another day I attended an organ concert there and we sat in the pews, which are richly decorated with carved “grotesques,” like griffins.

I’m not sure what this scrawny fellow is but he makes a nice contrast to the enormous organ in the background. 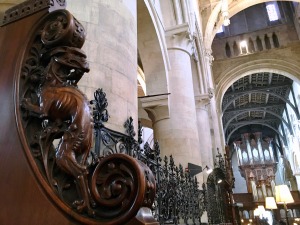 It must be an organist’s dream to play here.  The program said, “The organist has permission to play loudly” and he did.  Sadly there were only six people in attendance.

As I wrote last week, in contrast to the city centre my walk to the gym is through the low-rent district.  But I manage to find beautiful and interesting things along the way, and it’s not like I’m in any danger.

What a charming street name. 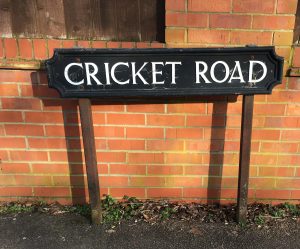 And what a cost-effective way to make more room for parking—instead of spending billions to widen the streets, just repaint the parking lines up onto the sidewalk! 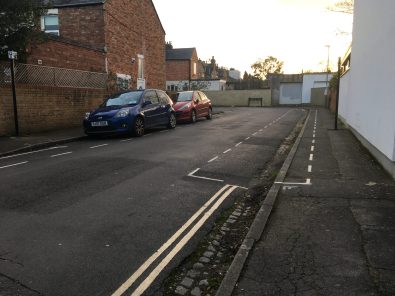 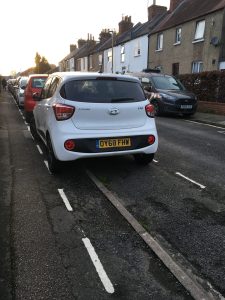 More and more trees and shrubs are blooming.

Back at the house, I do my laundry, hanging it to dry in the spare room.  I have stayed in a dozen British homes and even the few people who own tumble dryers, as they call them, have an aversion to using them. 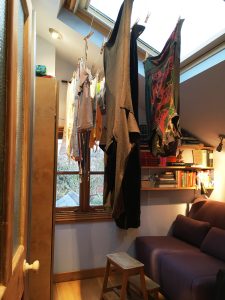 There are non-working fireplaces in the living room and dining room; originally there were probably fireplaces in every room, including the kitchen and bath.

The three cats do … cat things.  This day they were having a stare down.